Women workers, widows and relatives of labor leaders killed under the Gloria Macapagal-Arroyo government stood together to demand justice and an end to trade union repression.

Women workers, widows and relatives of labor leaders killed under the Gloria Macapagal-Arroyo government stood together to demand justice and an end to trade union repression.

The newly formed alliance Women Workers in Struggle for Employment, Empowerment and Emancipation (Women Wise3) marked August 13, the massive crackdown on the trade union sector during martial law with a resolve to continue fighting attacks on women workers and the labor sector in general.

On August 13, 1982, about a hundred leaders of the Kilusang Mayo Uno (KMU) were illegally arrested from their homes and offices, including Bert Olalia and Crispin Beltran. They suffered years of illegal detention and torture under the Marcos regime.

She stressed the importance of the participation of women workers in the struggle for trade union rights especially in the era of globalization. 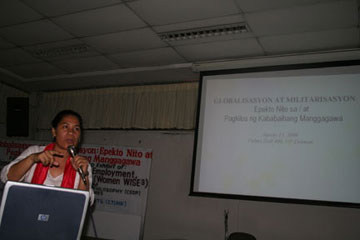 The percentage of women in the leadership of unions has also declined. According to NCRFW, in 1998, women comprised 35 percent of union leaders. But by 2000 it went down to 25.6 percent.

The Women Wise3, Arago said, aims to echo the calls for justice of women workers and all victims of labor repression.

Noralie Cristobal, wife of slain labor leader Gerardo Cristobal, related that their family went through a lot of difficulties.

Gerardo or Jerry among his colleagues served as president of the EMI-Yazaki union in Imus, Cavite. He was killed last March 10, 2008 by suspected state agents.

Noralie related that it was not the first time that an attempt on her husband’s life was made. On April 28, 2006, policemen attempted to kill her husband.

The perpetrators then were identified as Special Police Officer 1 Romeo Lara and Larry Reyes. Defending himself, Gerardo fired back at the policemen, killing Lara and wounding Reyes.

The couple has two children. Unemployed, Noralie depends on the support of her parents. 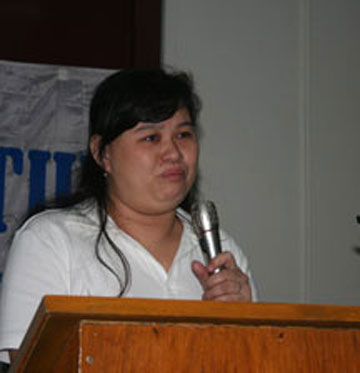 Maricel said they were not able to identify the perpetrators.

“Siya ay tapat at masipag na lider, huwarang asawa at mapagmahal na ama,” (He is a loyal and hardworking labor leader, a good husband and a loving father) said Maricel.

To support their two children, Maricel has put up a sari-sari (variety) store. She said that Jesus is a big loss to the family and to the union.