Lamentations of Families of the Disappeared

How does one cope when a loved one was involuntarily disappeared? How does one go on searching for days, weeks, months, years, decades?

How does one cope when a loved one was involuntarily disappeared? How does one go on searching for days, weeks, months, years, decades?

In a roundtable discussion organized by the Center for Women’s Resources (CWR), August 29, women who are mothers, wives, daughters and sisters of desaperacidos (disappeared) shared their continuing search for their loved ones and for justice.

Elizabeth ‘Nanay Beth’ Calubad’s husband and son were abducted June 17, 2006 by suspected state agents in Caluag, Quezon. Nanay Beth described his husband as someone who serves the people. Rogelio is a member of the National Democratic Front (NDF) peace panel.

“Hangad niya na ang magsasaka ay lumaya, makamit ang lupa ng mga magsasaka, iyon ang naging dahilan para siya dukutin ng military” (He worked for peasants to be free, to get their own land, this is the reason why the military abducted him.) said Nanay Beth. 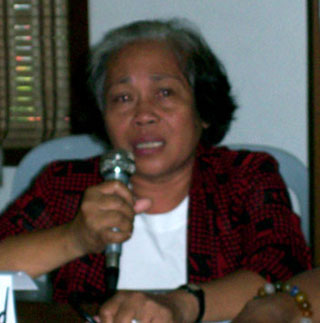 Nanay Beth said that her son Gabriel was not involved in his father’s activities. She said that Rudy was only driving the tricycle when the suspected soldiers blocked their way.

Nanay Beth related her ordeal since the disappearance of her husband and her son. “Nawala kami sa lugar namin. Kabuhayan, wala rin. At nagtago rin dito sa Maynila dahil kung hindi baka kami rin ay dukutin.” (We left our place. We have also lost our livelihood. We hid here in Manila because we might be abducted, too.)

“Ngayon, paano kami nabubuhay dito? Unang-unang tumulong sa amin ang Karapatan. Lumapit na kami sa [Commission on] Human Rights, hanggang ngayon pangako lang. Pangakong nakapako,” (Now, how do we survive? Karapatan was the first to help us. We went to the Commission on Human Rights, they promised to help us. Until now, it remains a promise, a broken promise.) she added.

Nanay Beth said she has no job. “Sa edad kong ito, wala nang tatangap sa akin.”(At my age. no one will hire me.)

Nanay Beth took her youngest daughter to Bataan and then to Quezon City so that he could continue her studies. She said it is also the poor who help them.

She still has a four-year old grandchild. “Nang mawalan siya ng ama, dadalawang taon pa lang.” (When her father disappeared, she was only two years old.)

For Dee Ayroso whose husband Honor Ayroso was abducted February 9, 2002 in San Jose, Nueva Ecija, the impact was not immediately apparent.

Honor was with Johnny Orcino when six armed men on board an owner-type jeep took them.

Dee said it was the second time that Honor and Johnny were abducted. Both were abducted in separate incidents in 1989. The two were interrogated and tortured in safehouses before they were surfaced and charged in court. Honor was acquitted on charges of illegal possession of firearms and subversion.

“Hindi malaking epekto noong umpisa. Ang asawa ko, lagi naman nasa malayo, peasant organizer. Habang tumatagal, doon mo nararamdaman kasi hindi na bumabalik eh,” (At first, the effect was not enormous. My husband was always away, he was a peasant organizer. As time goes by, the effect of his disappearance becomes stronger because he no longer comes home.) said Dee.

The couple has a son and a daughter. When Honor disappeared, they were six and almost two. Today, the eldest is already 13 and the youngest, 8. 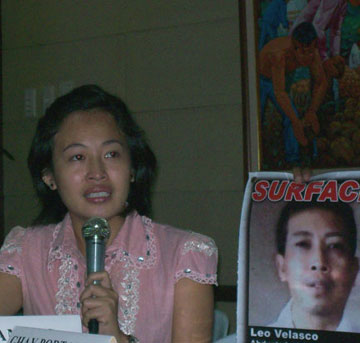 Velasco, an NDF consultant, was abducted by government agents on Feb. 19, 2007 in Cagayan de Oro, the city capital of the province of Misamis Oriental, southern Philippines.

Meanwhile, Principe, was presented to the media by Army officials as a high-ranking cadre of the Communist Party of the Philippines and the New People’s Army. Army officials said she was captured on November 28 in Cubao, Quezon City by virtue of standing arrest orders for six criminal charges, including kidnapping, arson, murder and frustrated murder in the provinces of Isabela and Nueva Vizcaya. She is detained at the Camp Crame.

Lorena has been working as a volunteer of Karapatan (Alliance for the Advancement of People’s Rights). She said, “Bago pa mawala si Tatay, kasama na ako ng mga kaanak ng mga biktima ng sapilitang pagkawala sa paghahanap. Pumapasok kami sa mga kampo ng military. Hindi ko akalain na ako ay maghahanap sa tatay ko.” (Before my father disappeared, I joined the families of the disappeared in searching for their loved ones. We went inside military camps. I didn’t expect that I would also search for my father.)