Gil Lebria is not just an overseas Filipino worker (OFW) working hard to support his family back home. He has been active in defending migrants’ rights and welfare.

His colleagues deemed that his advocacy is the reason behind his abrupt termination from work. They also suspect that the Philippine Embassy officials in Kuwait have a hand in what happened to Lebria.

On Sept. 3, Gil Lebria, coordinator of Migrante International-Kuwait chapter, received a phone call from the project secretary of his company, Al Kharafi National, informing him that he was terminated from his job. He was working as a warehouse keeper for the said company

When he asked the reason for his termination, the secretary gave no answer and only advised him to talk to the company’s human resources manager. Later, he was told that the company is reducing its workforce. He was also forced to sign a blank document in exchange for his passport and plane ticket.

In a statement, Migrante-Middle East said that Lebria’s termination from work is unlawful because it is without cause.

The group said it is a gross violation of Kuwait Labor Law and even international labor laws. 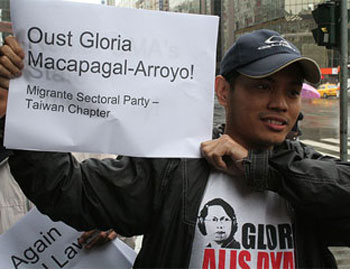 Migrante-Middle East said they have bases to suspect that Lebria’s termination from work was a handiwork of ‘those who got fury with Lebria’s expose and statements.’

Lebria was vocal in criticizing the ineptitude of embassy officials who have been noticed to be negligent in handling OFW-victims’ cases, the group said. “Only the Philippine Embassy in Kuwait and the POEA [Philippine Overseas Employment Agency] have the motive and power to coerce Lebria’s recruitment agency and to influence its foreign employer to terminate him from work.”

Sometime in September 2007, Lebria received an electronic mail from his agency in the Philippines, Globus recruitment agency, informing him that he would be repatriated as his deployment is the reason why Globus agency’s license was revoked and temporarily suspended by the POEA.

Migrante-Middle East said the mail implicated that the Philippine Embassy in Kuwait through the POEA is pressuring Globus agency to arrange the immediate deportation of Lebria.

He cited as example the three complaining workers of Al Essa Medicare Co. who have been “persuaded” by the Labor Attaché to just sign a compromise agreement or they would stay longer in Kuwait. By that time the three had already been terminated and had to buy their own food and other necessities with no assistance from the Embassy. OFWs in Kuwait Stand Up vs. Oppressive Company, Gets No Support from RP Labor Office

Bultron said, “[Philippine Ambassador to Kuwait] Ricardo Endaya needs to be reminded as well of the case of seven Al Jassim truck drivers who were arrested and subsequently deported on May 17 for allegedly instigating a strike, all that the Embassy could say was that they should abide by the law of Kuwait and respect the decision of the Kuwaiti authorities. But upon returning home, the workers stated that they were allegedly told by an Immigration officer that there were no valid grounds for their deportation.” On Labor Day, OFWs Protest ‘Triple Whammy’

Bultron said the Ambassador has yet to explain why three cleaners namely Noel Lacbayan, Julius Balron and another unidentified Pinoy worker were sacked and deported by National Cleaning Company.Embassy should provide needed assistance to its citizens: Bultron …

Instead of acting on these cases, Bultron said that Endaya has tried to circumvent these issues by maligning Migrante International and Lebria. He said it is of no surprise that Endaya is relieved with Lebria’s termination from his job because a thorn in his side has been too conveniently removed.

”This is part of a plan to harass, discredit, and silence migrant rights activists critical of the Arroyo administration through the POEA by coercing local recruitment agencies, and through embassy officials who influence foreign employers to terminate or not to renew the contract of migrant rights activists critical to the Arroyo administration.”