OSG Admits Lapses in Due Process in Arrest of UCCP Pastor

During a Court of Appeals hearing of the petition for certiorari, prohibition, and mandamus filed by the lawyers of Rev. Berlin Guerrero, representatives from the Office of the Solicitor General admitted that the government committed lapses in due process in the arrest of the pastor from the United Church of Christ of the Philippines. This alone, according to former Sen. Jovito Salonga, one of Guerrero’s lawyers, was enough to convince the appellate court to order his client’s release.

After one year, three months and 15 days in detention, Pastor Berlin Guerrero was happy to be free.

In its resolution, Sept. 11, the Court of Appeals (CA) Third Division ordered his release to the custody of his lawyers former Senator Jovito Salonga and Emilio Capulong Jr.

The CA began hearing the petitions filed by Guerrero’s lawyers after the case was remanded to the appellate court by the Supreme Court. 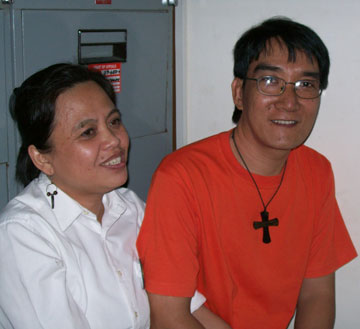 Guerrero, a pastor of the United Church of Christ in the Philippines (UCCP) was accused of murdering a certain Noli Yatco. The warrant of arrest for this charge was dated 1998.

The pastor was abducted May 27, 2007 allegedly by elements of the Naval Intelligence Security Forces. In an affidavit, the pastor said he was tortured in a safe house. He said that no one among his captors mentioned the murder case and he was accused of being an officer of the Communist Party of the Philippines (CPP).

On the same day, Guerrero was brought to the Philippine National Police’s (PNP) Camp Pantaleon Garcia in Imus, Cavite.

In an interview after the hearing, Guerrero said that the CA decision proves that the murder charge filed against him has no basis.

Speaking before Guerrero’s supporters and friends, Salonga said, “Sapat na ang admissions na ginawa ng kalaban at statements ng mga abogado ni Pastor para magdesisyon ang korte.” (The admissions made by the prosecution and the statements of Pastor’s lawyers were deemed enough for the court to issue a resolution.)

Guerrero explained that the Office of the Solicitor General (OSG) through its representatives admitted that the government violated due process in his arrest and detention. He said that Associate Justice Martin Villarama Jr of the Court of Appeals. saw the lack of probable cause in the murder charge.

Guerrero said that during the hearing, the Appellate Court pointed out that the lone witness to the murder charge filed against him was not personally examined by Judge Myrna Lim-Verano of the 5th Municipal Circuit Trial Court of Carmona and Gen Mariano Alvarez, Cavite before she issued the warrant of arrest.

The CA also prohibited the Lower Court from enforcing and implementing the order dated August 2, 2007 issued by Judge Garcia. The said order denied the motion to quash the warrant of arrest and to dismiss the information on the murder charge.

Bishop Solito Toquero, co-chairperson of the Ecumenical Bishops Forum (EBF), said that amid the controversies hounding the CA, hope remains. “Salamat sa Diyos at sa lahat ng tumulong.” (Thank God and all those who have helped.)

Guerrero said he hoped that the court would also hear the details of his abduction. He said that those who abducted and tortured him must be held liable.

Asked what he plans to do, the pastor said he would thank all the supporters, especially from the Church and spend time with his family.
It was the birthday of his youngest son, Jarius Vinces. The pastor said, “My immediate release from prison was his wish.” He said that his daughter Lora Wigbertte also celebrated her birthday last Sept. 9 and also wished for his freedom. (Bulatlat.com)