Raymond continued, “Hangga’t hindi nagdurugo, hindi nila kami nilulubayan. Ang iba, di na nila nakayanan ang karahasan” (They did not stop until we bled. Others were not able to withstand the violence.)

Raymond witnessed the torture of two University of the Philippines (UP) students Sherlyn Cadapan and Karen Empeño inside a military camp. He testified during the hearing of the writ of amparo case filed by the mothers of the two UP students before the 11th Division of the Court of Appeals. The two women and their companion Manuel Merino are still missing up to this day.

He said he wants justice not only for himself but also for other victims of human rights violations.

Erlinda Cadapan, mother of Sherlyn, joined Raymond in the filing of cases. She said, “Maraming involved. Isinawalat ng survivor na marami siyang nakitang dinukot, tinotortyur at tinatratong hindi makatao. Sana makatulong ang Ombudsman sa mga kaanak ng biktima.” (Many are involved. The survivor testified that he saw victims of abductions being tortured and treated inhumanely. I hope the Ombudsman will help the families of the victims.) 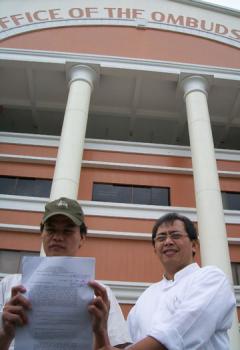 Raymond’s lawyer Fernandez said that the Office of the Ombudsman should act swiftly on the case. He said that the fact that Raymond was granted the writ of amparo means that the evidence is strong.

The Manalo brothers filed a petition for the writ of amparo on October 24, 2007.  The Court of Appeals (CA) granted their prayer for protection.

Marie Hilao-Enriquez, Karapatan (Alliance for the Advancement of Human Rights) secretary general, said that Raymund deserves all the support. “He is courageous. In spite of all odds, even if his enemies are powerful and even if the Ombudsman has a bad record, Raymond is determined to obtain justice.”

Enriquez explained that previous cases filed by victims of human rights abuses before the Ombudsman have not yet been resolved. She cited the cases filed by Lourdes Rubrico and Oscar Leuterio. Both were abducted by state agents in separate incidents. Leuterio also witnessed the torture of Empeño and Cadapan. He also saw the Manalo brothers inside Fort Magsaysay.

Enriquez also mentioned the cases filed by Hacienda Luisita workers and by the victims of the violent dispersal of a rally in October 2006.

Enriquez said, “I hope they will not deny the existing remedies to the victim.”

Raymond said, “Kahit gaano katagal, hindi kami susuko. Ang mahalaga mabigyan ng katarungan ang nangyari sa amin.” (However long this takes, we will not give up. What is important is that we get justice for what was done to us.)  Bulatlat