For this year, the Arroyo government would import 2.296 million metric tons (MT) of rice.

Based on the estimated NFA stock inventory as of July 1 this year, 929,337 MT are imported rice, accounting for 97.99 percent of the NFA stock.

The NFA targets to import 971,145 MT of rice from July to December. Meanwhile, the planned local palay (rice grain) procurement during the same period is only 51,238 MT.

In a primer titled “100% Rice Self-Sufficiency and Self-Reliance Equals Genuine Food Security,” the NFA Employees Association (NFA-EA) stated that from 1968 to 2008, the price of wholesale imported rice per MT was more expensive than domestic rice for 21 years out of the 48-year period.

Meanwhile, the wholesale price of local rice in April is P30,000 ($717) per MT or less than half the landed cost of imported rice. 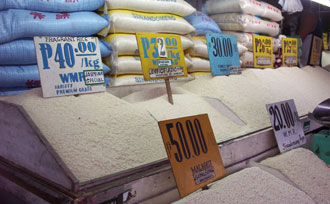 Even private traders are not interested in importing rice due to the high cost.

The NFA-EA also said, “Rice importation has greatly contributed to the NFA’s losses especially with the imposition of the rice import tariff.”

On top of this tariff, the NFA also spends for transport, handling, stevedoring, and arraste services, warehousing, pest management, among others.

It is only in 2007 when the Arroyo government exempted the NFA from paying tariff on rice imports.

Why does the government insist on importing rice?

Cosico said the Arroyo government’s rice importation program is in compliance with its commitment to the World Trade Organization (WTO). Under the WTO’s minimum access volume (MAV), the country is obliged to import a certain volume of rice whether or not there is a supply shortage.

Cosico said the Arroyo government seems to be telling them to buy imported rice at any cost. On the other hand, local procurement remains very low.