A fact-finding mission led by Migrante International was held Oct. 2 to 5 to look into the conditions of Filipino deportees from Sabah. Participants in the mission included Gabriela Women’s Party, EnGendeRights and the Association for the Rights of Children in Southeast Asia.

Members of the mission interviewed several deportees. The mission report reveals the sorry state of the deportees.

Immigration officers in Sabah arrested migrants from their houses, in their work places and even in public places like plazas.

They were harassed, humiliated and maltreated. Those arrested in their homes were herded into lorries, which were used to carry goods and materials.

At detention centers, 200 to 500 deportees occupied one cell. They were made to sleep on the floor, made of either wood or cement, without any mattress.

They were given food but not enough to feed all of them. Sometimes the food served to them were rotten and teeming with maggots. The rice were often not cooked. Their lunch was served late at 2 p.m. and their dinner at 9 p.m..

Detainees numbering from 200 to 500 shared one pail of potable water. They depended on the rain for bathing and washing their clothes.

Children and adults who got sick while inside detention cells did not receive any medical attention or treatment. 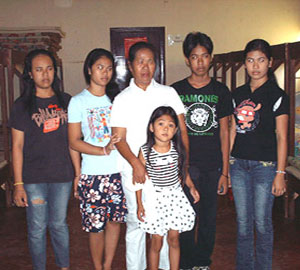 A Filipino family deported from Sabah. (Photo by courtesy of Migrante)

The children were also deprived of their basic right to education because they did not have any legal document such as birth certificates. Before their family was arrested, some of the children were even employed in different jobs in Malaysia, using fake documents to conceal their age and status.

Some detainees suffered undue punishment such as being kicked or slapped by jail guards.

Their personal belongings, money, and even the food and personal items brought by their visitors were confiscated.

The deportees said they were treated like criminals. From their cells, they were loaded into overcrowded buses and handcuffed while being brought to the pier. At the pier they were ordered to sit down for the head count. They were deported batch by batch in a ferry from Sabah to the Philippines via Bongao in Tawi-tawi and finally to Zamboanga City.

They said that even when they were already at the Zamboanga pier, Philippine government officials from the Department of Social Welfare and Development (DSWD) and the Department of Foreign Affairs (DFA) treated them the same way. The only difference was that they were not handcuffed.

In Sabah alone, there are more than half a million Filipino migrant workers. In August 2002, there were 8,838 refugees from Sabah. In 2005, 30,000 undocumented workers and refugees were deported.

The DSWD in Zamboanga City said there are currently 35,000 Sabah deportees and the number is expected to increase to 200,000 by the end of the year. 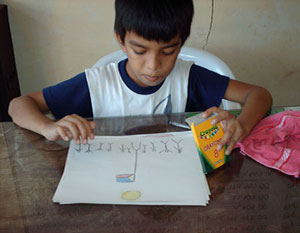 A Filipino child deported from Sabah. (Photo by courtesy of Migrante)

Migrante International said that despite having a working group created by Philippine and Malaysian governments, human rights violations against the deportees continue. Connie Bragas-Regalado, chairperson of Migrante International and secretary-general of the International Migrants’ Alliance (IMA) said the Inter-Agency Committee (IAC) for the RP-Malaysia Working Group on Migrant Workers practically does not exist.

“The IAC, instead of addressing the plight of our deportees from Sabah are busy processing travel documents so that the deportees can go back to work in Malaysia,” said Regalado.

Regalado said that the RP-Malaysia Working Group on Migrant Workers exists only in press releases to cover up the violence occurring during crackdowns being conducted by the Malaysian government against undocumented migrant workers.

Members of the mission said they would seek congressional hearings and investigations to look into the plight of deportees from Sabah. They would also submit their report to the United Nations Human Rights Council in Geneva and file a complaint at the office of the UN Special Rapporteur on the Human Rights of Migrants Jorge Bustamante. Bustamante would be going to Manila in time for the International Assembly of Migrants and Refugees (IAMR) from October 28 to 30. The IAMR is being held by migrants’ groups to parallel the 2nd Global Forum on Migration and Development to be hosted by Arroyo government. (Bulatlat.com)