Family of Convicted OFW in Taiwan Appeals for Help

The family of Alcaraz appealed for help in saving her from the firing squad in a press conference October 17 at the Migrante International office in Quezon City. 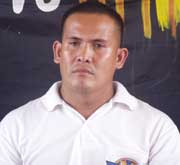 Pisueña said “Umaasa ako na maliligtas siya dahil may apat syang anak na naghihintay sa kanya.” (I am hoping that she would be saved from the firing squad because she has four children waiting for her.)

Alcaraz’ two sons Shalloma, 20, and Jerome, 18, who were at the press conference sent messages to their mother through the media. Jerome, her second son said in tears, “Nanay huwag ka mawawalan ng pag-asa, nangako ka sa amin na babalik ka hihintayin ka namin. (Mother do not lose hope. Your promised you would come back and we are waiting for you.)

Reacting to the press conference of Migrante International, Undersecretary for Migrant Workers’ Affairs Esteban Conejos claimed that the government is coordinating with its counterpart in Taiwan to save the life of Alcaraz. He added that the case is still on appeal and the Taiwanese court will hear the case on the first week of November. He added that the government provided Alcaraz with two lawyers. Pisueñas, however, said that it is a non-governmental organization that provided one lawyer for her sister.

Frustration with government
Also in the press conference was Ileno Terojas, uncle of OFW Jenifer Bidoya who was later identified as Venancio Ladion. Bidoya was beheaded last October 14 in Jeddah, Saudi Arabia after being convicted of killing a Saudi man.

According to Terojas, immediately after they found out about the arrest and conviction of Bidoya they coordinated with the government, particularly the Department of Foreign Affairs (DFA). Terojas said Ruel Garcia from the Office of the Undersecretary for Migrant Workers’ Affairs (OUMWA) instructed them to be quiet about the case and not to announce it to the media or approach other organizations, and the government would help them with his nephew’s case. When Terojas asked for the contact details of Migrante, the DFA official reportedly said they don’t have any.

But when they talked with Bidoya last October 10, when they were in Sibugan Zamboanga, his nephew told them, “Tulungan ninyo ako Uncle”(Help me uncle.) asking them to urgently follow up his case in Manila as he had no lawyer assisting him.

Upon arrival from Sibuyan October 14, Terojas was about to visit the DFA office when they found out from the news that Bidoya was already executed. 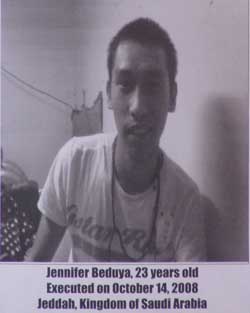 Terojas told Bulatlat, ”Sabi ng DFA confidential kaso ng pamangkin ko hangang sa napugutan na sya ng ulo, confidential pa rin? Anong klase yon?” (The DFA said that the case of my nephew was confidential but when he was beheaded was it still confidential? What kind of assistance is that?)

Terojas said his frustration with the government intensified when they went to the DFA last October 15 and was made to wait for an hour only to be told that nobody could attend to them as DFA officials were in a meeting and all personnel were busy preparing for the Global Forum on Migration and Development (GFMD). Terojas could not help but compare the DFA with Migrante International, which continues to give them assistance despite the fact that they too were busy preparing for the International Assembly of Migrants and Refugees.

Terojas advised families of OFWs in death row, “Huwag itikom ang bibig kasi magiging huli na ang lahat. Sa kaso ng pamangkin ko, huli na para sa pamilya namin. Sana lang hindi na maulit pa sa ibang OFWs.” (Do not keep mum [regarding the case of your relatives] otherwise it might be too late. In the case of my nephew, it is already too late. I hope that what happened to us would not be experienced by other OFWs and their families.)

“Why don’t you divert the funds you are going to use for the GFMD amounting to P150 million for the welfare and cases of migrant workers?” Martinez asked. (Bulatlat)