Dr. Carol Araullo, chairperson of agong Alyansang Makabayan (Bayan-New Patriotic Alliance) said that the ongoing financial crisis has exposed that the Arroyo government’s labor export policy is of no good.

She said that migration will never be the answer to the development of our country, and remittances cannot sustain all the needs of our country. “With the financial crisis now, more and more Filipinos will seek work outside the Philippines but will only find it difficult, and more migrants will be forced to go back home,” said Araullo.

“When they come back, no jobs are waiting for them. The fruits of their hardship have been invested in small business ventures, the daily needs of their family and their children’s education,” said Araullo.

Araullo said the government should pay attention to the generation and creation of jobs, especially decent and high quality jobs in the country.

She said the financial crisis will generate more conflict. “There will be a clash not just economically but socially and politically throughout the world. Our migrants will find themselves in a more difficult situation.” 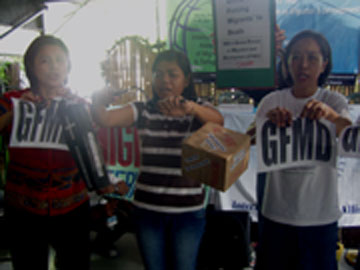 There will also be international actions against GFMD in South Korea, Middle East, Hong Kong, New York, Canada, the Netherlands and in some parts of Europe.