One of the lawyers of the 72 activists charged with murder in relation to an ambush incident in Mindoro Oriental said the accusations are baseless.

One of the lawyers of the 72 activists charged with murder in relation to an ambush incident in Mindoro Oriental said the accusations are baseless.

Lawyer Rachel Pastores of the Public Interest Law Center (PILC) said in a press conference in Quezon City, Nov. 15, that public prosecutors violated due process when they filed multiple murder and frustrated multiple murder charges, and issued warrants of arrest against 72 activists in Southern Tagalog.

The charges are in connection with a raid by the New People’s Army (NPA) in Calapan City, Mindoro Oriental in March 2006. 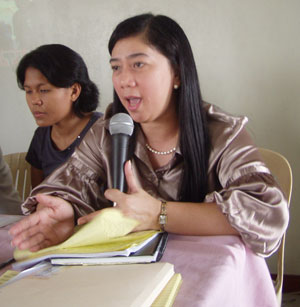 Pastores said that the original information filed by two officials of the Philippine National Police (PNP) on July 24, 2006 named only one respondent Rustum Simbulan and several John Does. She said the two policemen did not identify the John Does.

By May 2006, Assistant Provincial Prosecutor Dorina Joya decided to put the complaint on archive pending the arrest of Simbulan, said Pastores.

One year and four months after, Pastores said, Prosecutor Jumilito Dolor suddenly filed an amended information on the case, naming as respondents the 72 activists.

“The amended information in itself is highly irregular,” Pastores said. The prosecutor, she said, relied only on the affidavit of Vincent Silva who claimed to be a deep penetration agent (DPA) involved in the NPA ambush.

Pastores said further that Silva’s testimony is highly questionable. She said it is considered as extrajudicial confession because Silva did not swear before a lawyer, rendering his testimony invalid and inadmissible.

The legal counsel added that Silva did not say anything about the alleged participation of the 72 activists in the said ambush.

Pastores said further that the policemen who filed the original complaint alleged in their affidavits that more than 15 armed men ambushed the police station in Calapan, Mindoro Oriental. “How come they charged 72 individuals?” asked Pastores.

In fact, Pastores said, there was no motion to revive the case after it was put on archive in May 2007.

Without a single hearing, Judge Tomas Leynes accepted the amended information and issued warrants of arrest against the 72 individuals. “Under the rules, the judge should first inform the accused. The respondents only knew about the case when they were already being arrested,” said Pastores.