In a theatrical posture, Kahon tackles the torturous and complex issue of enforced disappearances, where artworks are fraught in individual loss, grief and tragedy. According to the organizers, “The show is never intended to wallow in agony, but is an exhibit of creative rumination replete with outrage, courage and resolute call for redress, critically bent to stir interest and foment argument.”

The idiom, “out of the box”, gets a new meaning that leads us to political art and the continuing search for the desaparecidos (disappeared). In time for the 60th International Human Rights Day, painters and human rights advocates presented a show entitled Kahon (Box) at the Lunduyan Art Gallery*.

In a theatrical posture, Kahon tackles the torturous and complex issue of enforced disappearances, where artworks are fraught in individual loss, grief and tragedy. According to the organizers, “The show is never intended to wallow in agony, but is an exhibit of creative rumination replete with outrage, courage and resolute call for redress, critically bent to stir interest and foment argument.”

Boy Dominguez’s “Desaparecidos” aptly visualizes the garrote as his idiom, a peculiar ceremony of slow and painful demise to dramatize the parallels of every imaginable and unimaginable torture perhaps experienced by vanished political activists. According to Dominguez, it becomes an elegy to the martyrdom of activists whose loss and heroic deaths fuels resistance against impunity and state violence. Imperatively, Dominguez said that the State’s armed violence can only be addressed by armed resistance.

“Closer Than You Think” astutely conveys the paradox of such political violence. This juxtaposition of victim and perpetrator is the drama of the composite paintings by Jose Burgos III, a brother of one of the desaparecidos, Jonas Burgos. According to Jose, the artwork tells how close families are to discovering the truth about the victims yet at the same time so far from it with all impediments thrown at their path. His canvas also suggests the brutality of the tormentors and how also close they are to their next victim or how they mock search efforts with their relentless denials and legal offensives. 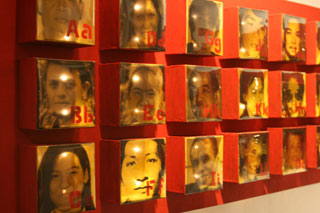 “Checklist” :an alphabet of the Disappeared (Photo by LEO DILAY)

“Checklist” by JL Burgos (another sibling to Jonas Burgos) is a light box-mixed media on a wood panel; illuminated pictures of desaparecidos (most of them victims of the Arroyo regime), with their initials arranged alphabetically. Taking the X spot in the range is a mirror, suggestively hinting at the viewer as the next possible of the relentless culture of impunity.

As a broader take on human rights, Umadhay comes up with an installation. A silhouette of a skull forms out of collage of images as a reservoir of human rights references. Starting from a local human rights perspective, he gradually takes on a global context with fragments of sheets of acetate maps of different parts of the world. His purpose is to demonstrate the enormity of the atrocities of dictatorial regimes then and now, from Latin America, Asia and so on, Umadhay says.

Ugatlahi’s “ Soiled” takes on a more suggestive visual rhetoric with their installation of a pair of soiled and torn clothing hanging from above a mount of soil, with a red cloth and candles surrounding it. But beyond evoking personal sentimentality, personal effects, anything from a piece of slipper or a ripped cloth, this work strangely becomes a collective portrait of victims. It conveys the harrowing tale and overlapping state of ironies: of absence and existence, of having found and still losing; of being alive and dead at the same time. 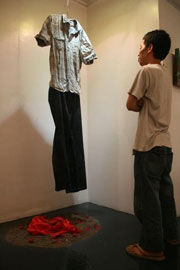 Kahon, in sum, chronicles the nefarious plot to silence political dissent and the chilling realities of a fascist regime. It also ruminates on the personal trauma of families of victims as well as that of victims’ colleagues, the mass movement, the people and the causes they serve. In fact abductions have inadvertently created activists among families and friends.

The artists behind the show believe that the exhibit’s significance lies in its explicit effort to impose upon the viewers’ imagination the unexplored emotive, psychological, political historicity, depth, and enormity of loss. “Aestheticizing political sentiments is indeed a daunting task and is a difficult as the search for the missing activists itself ,” said Dicky Joe Santos.

The kind of political and propaganda art that Kahon represents has always been considered a marginal if not a daring exercise in the art scene, however, this show takes no reservation in giving voice to those brutally silenced and vanished by a repressive state. 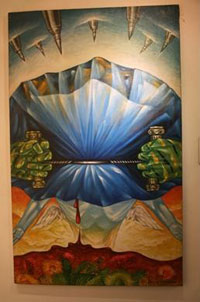 It is, decidedly, ideologically fierce and piercing and insistent in bringing human rights issues to the forefront of cultural and national consciousness.

*Lunduyan Gallery is located at 88-B Kamuning Rd., Quezon City