To present-day activists of the UP community, the book is a must reading. For no progressive movement could ever develop and achieve victory without drawing lessons from history .

For the un-initiated or to the mass of UP students and faculty, the book is a wealth of information and knowledge, from trivia about the names one sees in the halls and buildings, to the lives of the people you see around you, to the history of our beloved university.

Reading the book, one could not help but marvel at the colorful history of the premier state university in the country. The book, a collection of writings about UP’s storied past particularly its history of activism, brings the reader into the different periods in the university’s history: from its establishment to 1960, the turbulent times of 60s up to the declaration of Martial Law, the repressive period of Martial Law up to 1983, 1983-92, 1993-2000, and 2000 to 2008.

The writings about the first period 1908-1960, especially that of Dr. Elmer Ordonez and the editorial of historian Renato Constantino showed UP’s transformation from a tool of American colonization to an elite university enamored by its academic freedom; the growth of nationalism in the university right before the second world war and how it became a spark that ignited a student movement resisting the repression of the 50s and early 60s.

Writings about the second period showed the gestation of the national democratic movement not only in the university but in the whole country and the important role the faculty, students, and community of UP played in the process. It described the birth and blossoming of the Second Propaganda Movement culminating in the First Quarter Storm of 1969 up to the declaration of Martial Law. The writings also described the transformation of UP from an elite university into a university for the masses. An important feature of this section is the article of Prof. Judy Taguiwalo on the development of the militant women’s movement amid the semi-feudal society prevailing in the country.

The third period 1973-83 showed how the UP community tried to cope with Martial Law and how their defiance slowly gained momentum until the rise, once again, of activism and the protest movement of the late 70s and early 80s. It also chronicled the development of the progressive cultural and propaganda movement of the times that played a key role in breaking the climate of fear that Martial Law has tried to impose on the population.

Although there are still events and processes, which occurred during that period, that could still be added to the chapter, especially during the years from 1976 up to 1980. What Dante Ambrosio and Tess Vistro described as a relatively calm period punctuated by lightning rallies is true from 1973 up to 1975. It was a period of recovery and painstaking work, and, as Ms. Vistro described, a time of building networks.

By 1976, the influence of activists had already spread across a substantial number of student organizations – regional, varsitarian and academic organizations, fraternities and sororities, cultural groups – that some activists decided to shift their focus to organizing students in other universities at the university belt, and in urban poor communities. Inside the campus, protest actions were steadily intensifying such that the Metrocom and military agents could no longer contain these, especially with the eruption of the boycott movement. Big mobilizations replaced lightning rallies. LIghtning rallies were then being boldly held at Rizal avenue. 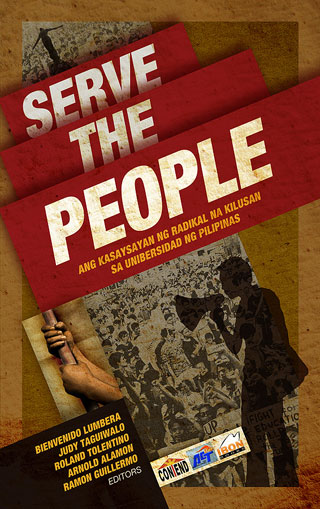 UP students tackled both university issues – such as the call for a return of the student council and the student representative to the Board of Regents, and against tuition fee increases – as well as national issues, such as ” Sahod itaas, Presyo ibaba”, “Ibagsak ang Martial Law”. Activists explained to the general population of UP students that “UP is a microcosm of Philippine society”.

The activists in UP played a key role in the struggle of the urban poor of Zone One Tondo Organization and the Batilyos of Navotas, as well as the establishment of the League of Filipino Students, the first chairperson of which was a UP student. By 1978 there was a reemergence of gigantic mass actions at Rizal Ave. and Plaza Miranda that were always attacked by the Metrocom. But these persisted until it was able to break the climate of fear that has gripped the country since the declaration of Martial Law in 1972. Activists from UP played a key role in all of these. There are more left to describe but it would take a separate article for this.