Solons Reiterate Call for Enactment of Bills on Human Rights

In its 2008 report, Karapatan said that under the Arroyo administration, 33 human rights defenders have been killed, three have been forcibly disappeared, seven were victims of frustrated killings, nine were illegally arrested, and eight illegally detained.

Tañada said, “With the bill to defend human rights activists, we hope that these attacks would be minimized.”

In a statement, Ocampo said, “The vibrancy of human rights’ enforcement and defense is a hallmark of a dynamic democracy. In this light, a law protecting human rights defenders and penalizing any violations of their rights in the pursuance of their advocacy must be immediately enacted for the effective elimination of all violations of human rights and fundamental freedoms.”

Tañada said he hopes that the said bills would be tackled in the plenary by the first quarter of next year.

Even as the Philippine government ratified the International Convention against Torture and Other Cruel, Inhuman or Degrading Treatment or Punishment in 1987, no law has been passed yet to criminalize torture. The Convention Against Torture (CAT) mandates each state party to take effective legislative, administrative, judicial or other measures to prevent acts of torture in any territory under its jurisdiction. 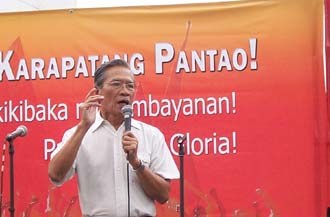 Meanwhile, the Philippine government has not ratified the International Convention for the Protection of All Persons from Enforced Disappearance.

Karapatan records show that under the Arroyo administration, there have been 201 victims of enforced disappearances and 1,010 victims of torture.

Tañada admitted, “What I am frustrated about is the Marcos compensation bill.”

The bill has been pending in the plenary since July. “The House leadership has not yet scheduled it for plenary debate. I don’t know if it will be calendared any time soon,” Tañada said.

Ocampo also urged the passage of the House Bill 3259 or the Command Responsibility Bill.

Command responsibility holds the superior responsible for crimes committed by his subordinates for failing to prevent the said crime or punish those who did it.

Tañada said the bill has been referred to the Committee on National Defense. “You can expect it will die there,” he said.

In a privilege speech, December 10, Ocampo said, “I urge the passage of these measures in the interest of promoting human rights.”

He added, “The eight years of relentless attacks against the people under Mrs. Arroyo must end. The painstaking work of the surviving victims and their families, human rights and church groups in exposing and opposing the grim human rights record of the Arroyo government must be rewarded by passing measures to enable the victims to hold the Arroyo government accountable for its crimes.”(Bulatlat.com)