Unrelated Killings or an Undeclared War?

Is the recent spate of activist killings in Southern Mindanao an unfortunate series of coincidences or are they somehow related to the Philippine military’s counter-insurgency program Oplan Bantay Laya 2?

Successive reports and claims of shootings involving a red XRM motorbike; the use of a .45 pistol and the fact that three Bayan Muna (People First) organizers and a fourth peasant activist have been killed here since early November suggests a possible link of sorts if not an actual conspiracy.

Successive reports and claims of shootings involving a red XRM motorbike; the use of a .45 pistol and the fact that three Bayan Muna (People First) organizers and a fourth peasant activist have been killed here since early November suggests a possible link of sorts if not an actual conspiracy.

All three Bayan Muna killings took place within 60 kilometers of each other in Compostela Valley and the neighboring province of Davao del Norte.

A week before his killing, a farm activist was gunned down outside Davao. Two weeks earlier, two more Bayan Muna workers were shot dead in separate incidents.

Bayan Muna coordinator Danilo Qualbar was shot four times in the stomach by unidentified armed men but his death merited no outrage, investigation or autopsy.

Danilo Qualbar, 48, was the first to die in November. His killing and the authorities’ response to it seem sadly typical: When he was slain on November 6, there was no outrage, no real investigation, no autopsy, no nothing. There was only a simple eulogy delivered in the Compostela town gym attended by his family and friends.

Three weeks after he was gunned down at a quiet crossroads while riding home to his wife and six children, the police had still to interview his family.

And when the Philippine Human Rights Reporting Project visited Compostela Valley the police chief showed no real eagerness to do so.

“They live up in the hills and besides they don’t want to talk to us,” said Inspector Ali Dampac, chief of the Compostela Municipality Police Force when asked why the police had yet to see them. 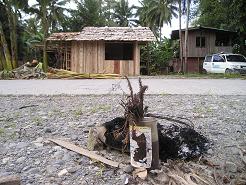 The spot where Qualbar was gunned down November 6 on his way home. According to witness Henry Balasag, 20, whose home overlooks the spot where Qualbar died, a gunman on a red XRM motorbike pulled up alongside him and shot him four times in the stomach with a handgun. ALAN DAVIS

Unprompted, the inspector insisted three witnesses including the barangay (village) captain of Qualbar’s hamlet had come forward to say the victim was not a member of Bayan Muna.

But an affidavit signed by Marlyn Caballero, wife of barangay captain Rafael Bugarotan and seen by the Philippine Human Rights Reporting Project makes no mention of whether the victim was a member or not of Bayan Muna.

Qualbar was shot dead at Osmena Crossroads at around 5.30 p.m. The crossroads is a ten-minute drive out of Compostela town.

The killer wore a bull cap, blue jacket and gray knee-length shorts according to Balasag, who says the police failed to interview him. They did however take a statement from his mother who also witnessed the killing. A copy of her statement was given to the Philippine Human Rights Reporting Project by the police.

Balasag said his first reaction was to run to where Qualbar lay dying, but was warned back by his mother. The assailant was still waving the gun around as he tried to ride his motorbike which had toppled over during the shooting. Balasag says he did not get a clear look at the gunman’s face because of the cap.

Three days after Qualbar was killed, another local organizer of Bayan Muna was shot dead in Davao del Norte as he answered his door to two gunmen on the evening of November 10.

Rolando Antolihao, 39, a banana plantation worker and Bayan Muna member was killed around 6 p.m. on November 10 in front of his wife and two-year-old daughter in the municipality of Kapalong, less than 20 kilometers from Tagum City. He was shot seven times according to human rights group Karapatan which visited the isolated scene of the killing the following day.

A fourth activist, Isabelino Celing, 47, died on December 6 in Tagum City Hospital, six days after being shot by a gunman in Monkayo Town. The gunman also reportedly rode a red XRM motorcycle.

Celing was the second Bayan Muna worker to be killed in Monkayo town in just four months.

The first was Roel Dotarot, 33, who was shot dead on August 15 by two gunmen wearing ski masks. The gun men were also seen beside an XRM bike by witnesses. The color of that bike is not reported.

Not a Bayan Muna member?

Compostela is a rural municipality of 70,000 people in Compostela Valley which is dominated by extensive banana plantations and rice fields from which it generates most of its income. The town itself is little more than a dusty settlement of basic stores, bakeries and short order diners separated by overgrown lots. Yet it attracts people down from the surrounding hills where the roads have yet to reach.

According to Inspector Dampac, Qualbar was a “pure businessman” and was probably killed over a debt or a deal gone bad. The motive for Qualbar’s killing, the police seemed to be suggesting, was anything but political.