Laid off OFWs in Taiwan Duped by Malacañang

De Borja said, “Ang hinihingi lang naman po naming ay ibigay yung rights naming mga OFWs.” (What are we are asking for is for them to give us what is due to us.)

She said the projects offered by the Arroyo government could not provide an immediate solution to their problems.

Martinez said some of the retrenched OFWs have been charged with estafa by lending agencies. 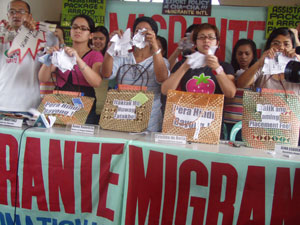 Retrenched overseas Filipino workers from Taiwan ripped the papers that the government gave them as ‘assistance package’. (Photo by Angie de Lara)

He said that the December 5 incident in Malacañang only shows that the Arroyo government is not ready and not serious in dealing with the crisis. He criticized Malacañang for deceiving the OFWs amid the crisis.

Martinez said the OFWs are demanding for a reimbursement of their plane tickets, financial assistance, payment of the remaining amount of the contract, and the release of the P10 million OWWA ($211,081) funds to help the OFWs.