In August 2006, Mrs. Gloria Macapagal-Arroyo by virtue of Administrative Order No. 157, created the Melo Commission to address media and activist killings.

In its findings, the Melo Commission held Gen. Jovito Palparan Jr., and some of his superior officers as responsible for failing to prevent, punish or condemn the killings under the principle of command responsibility.

Karapatan lamented that Palparan has not been sent to court for his alleged role in the killings. The group also criticized the Arroyo government for appointing former Armed Forces of the Philippines (AFP) Chief of Staff Hermogenes Esperon as the presidential adviser on the peace process.

The group said further, “Whatever little gain or remedy that may have been achieved …through the introduction of the writ of amparo and habeas data, are now being systematically undermined by the very institutions tasked to act judiciously on these incidents [of killings and other rights abuses].”

Adopted by the Supreme Court on September 25, 2007, the writ is a remedy available to any person whose right to life, liberty, and security has been violated or is threatened with violation by an unlawful act or omission of a public official or employee, or of a private individual or entity.

Karapatan expressed frustration over the dismissal of the petition for the writ of amparo and habeas corpus filed by Editha Burgos, mother of missing activist Jonas and the dismissal of the petition for writ of amparo filed by Lourdes Rubrico. Rubrico is an urban poor leader allegedly abducted on April 3, 2007 by armed men who identified themselves as government agents.

The group said that when court orders are favorable to the victims, the orders are ignored, questioned or not followed to the letter by the respondents.

Enriquez cited as an example the habeas corpus petition for missing activists Sherlyn Cadapan, Karen Empeño and Manuel Meriño. She said that despite the court order for the release of the three abducted activists, the military refused to admit having custody of the three. She lamented that the court denied the petition for an inspection of military camps and production of documents. 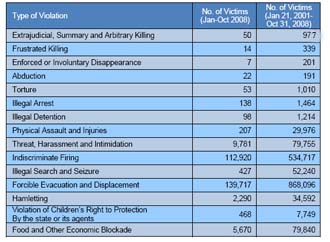 The report also notes the increasing cases of torture, with 53 victims this year and illegal arrests, with 128 victims.

Enriquez said the figure on illegal arrests does not yet include the 72 Southern Tagalog activists who were charged with multiple murder and frustrated multiple murder for allegedly participating in a raid by the New People’s Army in Mindoro Oriental and the 32 individuals charged with arson, conspiracy to commit rebellion and destruction of property. Six of the 72, including labor lawyer Remigio Saladero Jr., have already been arrested and detained at the Calapan City District Jail.

Enriquez said that under the counter-insurgency program Oplan Bantay Laya II (Operation Freedom Watch II), ordinary citizens have also been victimized and have formed part of the broader circle of targets.

For the past ten months, Karapatan has documented 139,000 victims of forcible evacuation and displacement; 2,290 victims of hamletting; 112, 920 victims of indiscriminate firing; and, 5,670 victims of food and other economic blockade. These incidents occurred during heightened military operations in communities.