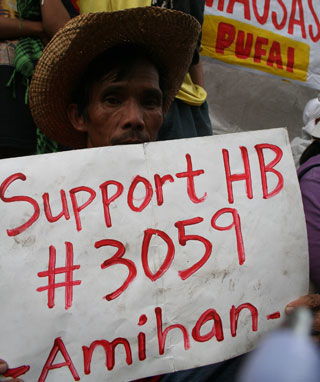 Nestor Villanueva, one of the farmers from Hacienda Yulo, supports HB 3059 or the Genuine Agrarian Reform Bill (GARB). (Photo by Ronalyn Olea)

In an interview with Bulatlat, Nestor Villanueva, 51, a farmer in Hacienda Yulo in Canlubang, Laguna said he and the other farmers have not benefited from the CARP.

Villanueva said their ancestors have been tilling the land in Hacienda Yulo since 1910.

He said that during the Aquino administration, they fought for the distribution of land but the Hacienda Yulo was exempted from CARP coverage as the landlord declared the land as non-agricultural.

In 1990, the Department of Justice issued Opinion No. 44 that stated that all lands classified before 1988 as non-agricultural are exempted from coverage of land reform.

The local government, said Villanueva, also declared the land as a forest reserve and watershed. He said, however, that a subdivision and a golf course have been built inside the hacienda.

Villanueva is among millions of farmers who have remained landless under the CARP. The KMP said the CARP is the source of all the troubles of landless farmers over the last 20 years.

The KMP and Pambansang Lakas ng Kilusang Mamamalakaya ng Pilipinas (Pamalakaya or National Unity of the Fisherfolk Movement in the Philippines) said CARP has provided the legal basis for the denial of farmers’ land rights, and the landgrabbing spree of big landlords inside Fort Magsaysay and Hacienda Luisita, courtesy of the law’s fatal flaws and wide loopholes. “The 3,100 hectares in Fort Magsaysay were cornered by the landlord syndicates, while the 6,453 hectares in Hacienda Luisita were kept untouchable because of CARP.”

Citing the recent study made by the Sentro Para Sa Tunay na Repormang Agraryo (Sentra or Center for Genuine Agrarian Reform), KMP and Pamalakaya said that on September 2007 the Department of Agrarian Reform (DAR) reported that 5,049 emancipation patents (Eps) and 103,392 certificates of land ownership awards (CLOAs) were canceled, covering 204,579 hectares of land acquired under the agrarian reform program.

Both groups asserted that the figures they cited did not yet include pending cases of cancellation of EPs and CLOAs before the DAR. They noted that the agrarian reform agency, up to now, has been unable to determine how many land titles were canceled or revoked by DAR.

The two groups said the Congress should have instead passed House Bill 3059 or the Genuine Agrarian Reform Bill authored by the late Anakpawis party list Representative Crispin Beltran and co-authored Mariano, Ocampo, Casiño, Maza and Ilagan. The bill seeks to cover all agricultural lands and distribute these lands to landless farmers across-the-nation for free.

In an interview with Bulatlat, Mariano said the joint resolution has further worsened the ‘bogus’ CARP.

He said that the resolution effectively removed even the token distribution of land under CARP.

The joint resolution extends the CARP for another six months, stating that private owners of agricultural land may enter into voluntary offer to sell (VOS) or voluntary land transfer (VLT) schemes. Mariano said it is unlikely for landlords to offer their land to landless farmers. “Even if they do, landlords can easily withdraw from the VOS,” he said.