Moro groups have joined calls to stop Israel’s attacks on Gaza. They said the Bangsamoro people are, to some extent, beset with similar aggression and feel for the Palestinians in their quest for the right to self-determination.

Military assault on Gaza has claimed the lives of close to 700 Palestinians, about a third of whom are women and children.

In a statement, Bai Ali Indayla of the Kawagib said, “We are very dismayed by the apparent impunity with which Israel with its complicit state, the U.S., persist in their systematic oppression of the Palestinian people. Israel , with the backing of the U.S. , has been committing immense crimes against humanity despite strong condemnation of international watchdogs.”

“The Bangsamoro people are, to some extent, beset with similar aggression and feel for the Palestinians in their quest for the right to self-determination,” the Kawagib said. 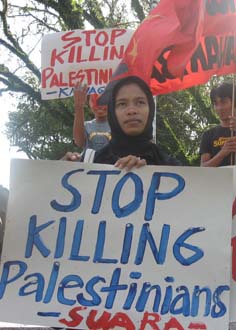 A Moro woman joins the rally calling for an end to Israeli attacks on Gaza. (Contributed photo)

It added, “The Philippine government has consistently suppressed the rights and aspirations of the Bangsamoro people and brazenly violated international humanitarian law with its all-out war policy. It has been quick to resort to the military option to contain peace and security issues and puts little consideration to the number of civilian lives lost and affected in its military campaigns.”

In a separate statement, LKM said the Israeli state and its primary ally, the US government, must be held responsibile for the ‘tragedy.’

The group likened Israel’s actions to Arroyo government’s approach toward the Bangsamoro people.

The group said, “This is what the US-puppet Gloria Macapagal-Arroyo is doing in its present war in Mindanao against our Muslim compatriots. More than 600,000 people have lost their homes and more than 200 have died since August 2008 when the full-scale war broke out. Many of the victims are women and children.”

“We demand that Israel should immediately end its military offensive on Gaza, free all Palestinian detainees from Israeli jails, and end the occupation of Palestine and people’s right to sovereignty and self determination be respected,” the LKM said.(Bulatlat.com)