Seven detained activists slapped with murder charges were ordered released, February 5. Now released from detention, they are planning to file counter charges against state security forces and state prosecutors who were responsible for their arrest.

Seven detained activists slapped with murder charges were ordered released, February 5. Now released from detention, they are planning to file counter charges against state security forces and state prosecutors who were responsible for their arrest. 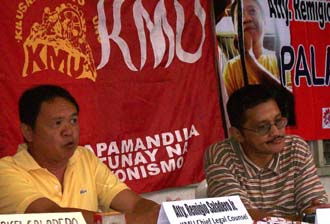 (L) Labor lawyer Remigio Saladero Jr. and (R) labor organizer Arnold Seminiano face members of the media in a press conference a day after their release from detention. (Photo by R. Olea)

The seven were among the 72 respondents to three multiple murder and three frustrated multiple murder cases filed in relation to a March 3, 2006 ambush by the New People’s Army (NPA) against policemen in Calapan City. The NPA is the armed wing of the Communist Party of the Philippines (CPP).

In his decision, Judge Manuel C. Luna, Jr. of Branch 39 of the Calapan City Regional Trial Court quashed the amended information in the case against the 72 activists. Luna pointed out that the rules of court requires that a complaint or information must charge but one offense.

In a press conference Febuary 6, Saladero said, “Nakita ng judge na hindi marunong gumawa ng kaso ang prosecutor. Pinagsama ang anim na kaso sa isang information.” (The judge was able to see that the prosecutor did not know how to file charges. Six charges were filed based on one information.)

In an interview with Bulatlat, Lawyer Rachel Pastores of the Public Interest Law Center (PILC) said of the court decision, “Kahit paano, masaya. Nakalaya na sila.” (Somehow, we are happy. They have been freed.)

Pastores added though that they find the basis for the court decision lacking. “In the first place, the case is fabricated. The judge could have dismissed it for lack of probable cause.”

Pastores said the PILC will file a motion for partial reconsideration. “The case is not yet dismissed. The information may be re-filed.”