“The seriousness of this crisis is such that we cannot expect any solution within the system and certainly not from the US administration, certainly not from the G-20 because within that group, except for a couple of exceptions, is the dominant Washington consensus of the neoliberal agenda, ” said Michel Chossudovsky, a progressive economist and academician.

“In the Philippines, this crisis will be extremely severe because it is imposed upon an existing situation…of dependency, lack of sovereignty, crisis of the real economy, and poverty of the large majority of the population.”

Debunking claims of financial analysts, a scholar asserted that the global economic crisis is a result of financial manipulation. Michel Chossudovsky, director of the Centre for Research on Globalization, also said that the current proposed solutions to the crisis will ultimately fail.

In a forum entitled “Global Financial and Economic Crisis: Exposing Capitalism, Looking for Alternatives” held February 10 at the Asian Center of the University of the Philippines in Diliman, Chossudovsky, said, “We are at the crossroads of the most serious crisis of our history. Its comparison is with the Great Depression of the 1930s… we are really dealing with the first major global economic crisis.”

The forum is part of the two-day lecture of Chossudovsky organized by the Bagong Alyansang Makabayan, Ibon Foundation and RESIST!.

Chossudovsky has taught at universities and academic institutions in North America, Western Europe, Latin America, Asia and the Pacific. He is currently teaching in the International Development and Globalization Studies Program at the University of Ottawa.

He is the author of several international best sellers including The Globalization of Poverty and the New World Order (2003) and America’s “War on Terrorism” (2005) and more than 500 articles. His writings have been translated into more than 25 languages.

Chossudovsky said, “We must understand that it’s not a spontaneous downturn as some financial analysts suggested that this is some kind of downturn of a business cycle and it goes up again. This crisis is a result of financial manipulation. It is the result of derivative exposure, the use of very complex speculative instruments which have the capacity of moving markets up and down.” 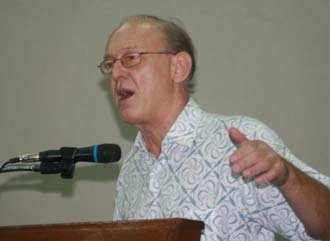 Michel Chossudovsky delivers a scathing criticism of US’ neoliberal policies in a forum held at the University of the Philippines in Diliman. (Photo by Raymund Villanueva)

Chossudovsky said that in Southeast Asia and the Philippines, this crisis takes its roots in the debt crisis of the 1980s. “It is a continuum but at the same time there are sub-stages which have led up to the meltdown of the global financial markets.”

He said that 1980s is the beginning of neoliberal economic policies which led to the Western countries’ restructuring of the State, the phasing out of social programs, privatization of state assets. “It is essentially an agenda which serve the interests of financial institutions and large corporations at the expense of the social project which emerged in the post-war years which is largely based on the notion of welfare state…”he said.

Chossudovsky continued, “They also established a new agenda in the developing countries which is an imposition of strong economic medicine under the auspices of the International Monetary Fund (IMF)-World Bank.”

He said that there were impositions of deadly macroeconomic reforms resulting from the increase in the levels of external debt in the Philippines and other developing countries. The IMF and WB lend money with strings attached, the structural adjustment programs (SAPs), which according to Chossudovsky, include prescriptions such as closing down schools and hospitals, sending off the state assets to the private capital, liberalizing trade, cutting subsidies to agriculture, among others.

“They [IMF-WB] lend money to trigger the reimbursement of the debt and in the process, they impose conditions which in effect establish a parallel government, there is no sovereignty under that kind of arrangement,” Chossudovsky explained.