Chronicling the Efforts for Justice

Let the Stones Cry Out: The Continuing Search for Justice
Published by the National Council of Churches in the Philippines (NCCP)
188 pages

Let the Stones Cry Out: The Continuing Search for Justice not only depicts the darkness engulfing the nation but also chronicles the efforts of Christian churches and other human rights advocates in the Philippines to counter such darkness.

Let the Stones Cry Out: The Continuing Search for Justice not only depicts the darkness engulfing the nation but also chronicles the efforts of Christian churches and other human rights advocates in the Philippines to counter such darkness.

The book published by the NCCP presents the campaigns for the promotion and advancement of human rights in the Philippines at a time when extrajudicial killings, enforced disappearances and other abuses are being committed with impunity.

By bringing to the attention of the international community the human rights crisis in the country, the Ecumenical Voice for Peace and Human Rights in the Philippines (Ecumenical Voice for brevity) and the Philippine Universal Periodic Review (UPR) Watch also amplified the cries for justice for the hundreds of victims of extrajudicial killings and enforced disappearances. 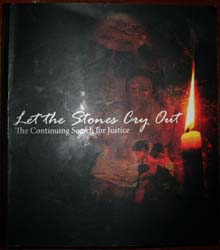 The Ecumenical Voice presented the “Let the Stones Cry Out: An Ecumenical Report on Human Rights in the Philippines and a Call to Action” to various institutions in the US, Canada and Switzerland.

The North American delegation of the Ecumenical Voice took the report to the U.S. Congress in March 2007. Marie Hilao-Enriquez, Karapatan (Alliance for the Advancement of People’s Rights) secretary-general and Bp. Eliezer Pascua, United Church of Christ of the Philippines (UCCP) general secretary, testified before the US Congressional Committee on Defense chaired by Sen. Barbara Boxer. It was the first US Congressional hearing that tackled the human rights situation in the Philippines. Church and human rights groups were not able to get an audience with a US Congressional Committee before even during the height of Martial Law. They also brought the report to Canada and submitted it to the Parliament.

The UPR is a process which involves a review of the human rights records of all 192 UN Member States once every four years. The UPR is a State-driven process, under the auspices of the Human Rights Council, which provides the opportunity for each State to declare what actions they have taken to improve the human rights situation in their respective countries and to fulfill their human rights obligations.

The Philippine UPR Watch delegation also went to the 8th Session of the Human Rights Council in June 2008. The 8th session was the occasion for UN Special Rapporteur on Extrajudicial, Summary and Arbitrary Executions Prof. Philip Alston to present his report on the Philippines, among others.

Alston went on a mission to the Philippines in 2007 to investigate the spate of extrajudicial killings and came up with a report specifically pointing to the military’s involvement in these violations.