Marie Hilao-Enriquez, Karapatan secretary general, noted, “The killings are picking up again at an alarming rate of one victim per week. This is almost the same scenario in 2006, if not worse.”

According to the Karapatan’s documentation team, 16 have been killed in just three months. Two were killed in January; seven in February and seven more in March.

Four of the victims are female, including a one-year old child.

Marie Hilao-Enriquez, Karapatan secretary general, noted, “The killings are picking up again at an alarming rate of one victim per week. This is almost the same scenario in 2006, if not worse.” 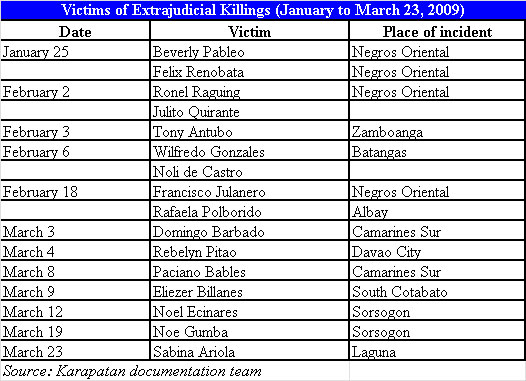 Latest victim
The latest victim, Sabina Ariola, was hit by a lone gunman in the abdomen, at around 8:25 a.m, March 23 at Bgy. Pook, Sta. Rosa, Laguna. She died at around 11 p.m. while undergoing treatment.

Her companion Adelaida Calosa, 48, was hit on the face by the same bullet that killed Ariola and is still undergoing medical treatment.

Karapatan reported that Ariola and Calosa were riding on an elf truck parked at the Metroville Subdivision in Barangay Pook, Sta. Rosa when the lone gunman climbed up and shot at them. The two were about to announce important urban poor concerns through the public address system attached to the truck when the attack happened.

In an interview with Bulatlat, Enriquez linked the rise in cases of extrajudicial killings to the counter-insurgency program of the government, the Oplan Bantay Laya I and II.

Enriquez noted that in 2006, there were 220 victims of extrajudicial killings. The year, she said, was declared by the Armed Forces of the Philippines as the end year of the Oplan Bantay Laya I. “…Naghabol sila ng numbers na pwedeng patayin. Makikita sa documentation namin na ang 2006 ang may pinakamataas na bilang ng extrajudicial executions.” (They were trying to accelerate the number of those they could kill. Our documentation showed that 2006 had the most number of extrajudicial executions.)

Enriquez noted further that President Gloria Macapagal-Arroyo and military officials vowed to wipe out the insurgency by 2010. “Ang 2009 ay parang run up to the 2010 deadline…Ngayon pa lang naghahabol na uli sila ng numbers…Alarming [para] sa amin ang rate and frequency again ng pagpaslang,”(The year 2009 is the run up to the 2010 deadline…Now they are trying to accelerate the number of killings…The rate and frequency of the killings is already alarming.) she said.

The human rights leader further said that civilians, not the armed rebels, are the targets of the counter-insurgency operations of the government. Enriquez said that most of the victims were leaders and members of people’s organizations that are critical of government policies.

Enriquez recalled that Prof. Philip Alston, United Nations Special Rapporteur on extrajudicial, summary or arbitrary executions, also pointed to the government’s counter-insurgency program as one of the causes of extrajudicial killings in the Philippines.

Alston visited the country in February 2007 to investigate the spate of killings in the country.

Enriquez said that their group will continue with the international campaign called “Stop the killings!”