She said formation of Makabayan was the “first time a real nationalist coalition” will exist in the country. “This is the only party that is willing to die for their philosophy.”

Maza said that the coalition is ready to oppose all moves to change the 1987 Constitution. “We vow to prosecute Pres. Gloria Macapagal-Arroyo, First Gentleman Mike Arroyo and top Arroyo officials for plunder and corruption, human rights abuses and other crimes committed under her administration,” she said.

Mariano said Makabayan will be aggressive and strong in the face of big challenges and responsibilities.

In her speech, Maza recalled the political persecution the progressive party lists have gone through, “Maraming hagupit ang hinarap. Walang nagawa ang estado sa tatag ng ating prinsipyo, sa kasigasigan ng ating mga kasama at kaibigan” (We confronted persecution. The state failed to destroy the steadfastness of our principles and the determination of our colleagues and allies.) 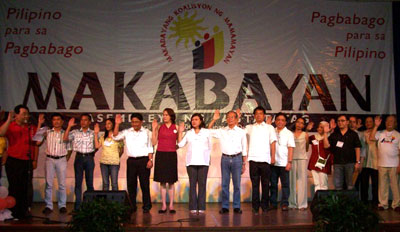 In his message, Sison said, “The electoral form of struggle can be a major part of the movement to arouse, organize and mobilize the people to achieve immediate basic reforms or the ultimate aim of social revolution. There is no error of electoralism or parliamentarism when there is no foreclosing of other forms of struggle that the people have the sovereign right to adopt and wage. There is also no error of reformism when there is no pontification that the struggle for reforms is the sole option of the people.”