Why Gloria’s P330-B “Stimulus Package” Will Fail: A Critique of the Economic Resiliency Plan (ERP)

Aside from paying for the additional debt that government will surely incur to fund the ERP, ordinary income earners and taxpayers will also directly shoulder a significant amount of the Arroyo administration’s stimulus package. The supposed added benefits to members of social security institutions apparently would come from their extra contributions, and not from government funds. NEDA, for instance, is proposing to extend P10, 000 ($209) in so-called “unemployment benefits” to SSS members affected by the global economic turmoil. The said agency did not specify where it intends to source the money for this, but SSS raised the option of increasing the contributions from its members to bankroll the unemployment benefits.

As part of expanding the benefits of members of social security institutions, the SSS has already approved a P500-million ($10.48 million) fund to allow its members hit by the global crunch to avail of a maximum P15, 000 ($314) in emergency loans. But because the scheme involves loans instead of grants, it only threatens to bury in deeper debts the jobless SSS members who face a worsening uncertainty of finding a job soon, if at all. The said social security institution has also set strict and highly restrictive guidelines for those who can avail of the emergency loan. To illustrate, only SSS members who were retrenched from work starting January 1 are eligible, must have updated contributions and updated loan amortization. In other words, the SSS is further milking the workers dry instead of making available to them funds, which come from the workers themselves through their contributions, to help them cope with the raging crisis.

The ERP also intends to supposedly expand government’s social protection programs including the so-called Conditional Cash Transfers (CCTs). But this program is also criticized for being extremely limited both in funding and scope. For instance, out of some 4.5 million poor households nationwide, CCTs target only 321,000, mostly in Metro Manila. (See Table) 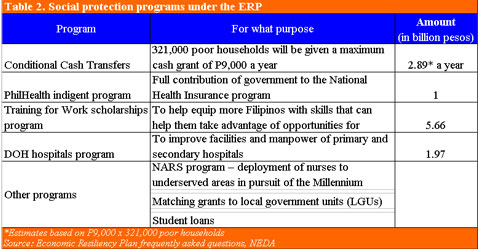 The CCTs is an old program of the Arroyo administration that is being funded mainly through the so-called “Katas ng VAT”. But since a huge portion of government’s VAT collections comes from the poor and ordinary income earners through their VAT payments for petroleum products, electricity, water and other essential goods and services, the ordinary people themselves are the ones funding the CCTs. Furthermore, CCTs are also meaningless amid skyrocketing cost of living, deteriorating jobs crisis and worsening poverty in the country that remain unaddressed and are even aggravated by wrong economic policies of government.

Meanwhile, the education and health components of the ERP will not have an impact on the social protection needs of the people as long as the overall policy direction of government is to privatize and commercialize the country’s public hospitals and schools such as HB 3287 of Rep. Roque Ablan Jr., which intends to corporatize 68 public hospitals nationwide. ERP’s health and education programs are also lip service in the context of meager and declining national budget for social services. In fact, compared to the Aquino, Ramos and Estrada administrations, the Arroyo administration posts the lowest annual budget allocation for health (1.7 percent of the national budget), education (15.2 percent, second lowest behind Aquino’s 12.3 percent) and housing (0.4 percent). (To be continued)(Bulatlat.com)