Leaders of progressive party-list groups and families of victims of extra-judicial killings filed today a petition for quo warranto before the House of Representatives Electoral Tribunal (HRET), seeking to disqualify Retired Major Gen. Jovito Palparan from becoming a representative.

In an interview with Bulatlat, Anakpawis Rep. Rafael Mariano said Palparan is ineligible to become a representative since he does not come from a marginalized sector.

“He’s a man of power, not of marginalized sectors. Therefore he is not qualified to be a nominee,” Mariano said. 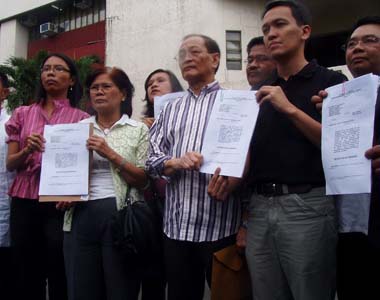 “Jovito Palparan, Jr. is not an alleged victim of communist rebels, and neither is he a former rebel. Furthermore respondent is definitely not a security guard,” the petition said.

It added that Palparan is a “man of power” since he held high-ranking positions even after he resigned from the military.

Erlinda Cadapan, one of the petitioners and mother of missing UP student Sherlyn, said the former major general does not deserve to be in Congress. 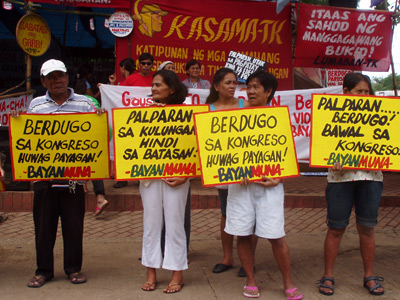 Members of progressive groups troop outside the south gate of the Batasang Pambansa waving banners and posters to protest the assumption of Palparan as party list representative.(Photo by Anna Kristina Virtusio)

Tagged as “the Butcher” by activists, Palparan was found responsible by the SC for the abduction of farmers Raymond and Reynaldo Manalo in Bulacan on suspicion of being communist rebels.

He is also allegedly behind the killings and enforced disappearances of activists, political leaders and journalists during the Arroyo administration.

Another petitioner, Bagong Alyansang Makabayan Secretary General Renato Reyes Jr., said they will bring the disqualification case to the Supreme Court if they have to.