Farmers, fisherfolk and their families were forced out from the premises of the Batasan Complex on their 40th day of the Rural People’s Camp Out for Genuine Agrarian Reform yesterday afternoon around 2:00 p.m.

Kilusang Magbubukid ng Pilipinas (KMP) secretary general Danilo Ramos said they did not expect the demolition. “Inaasahan namin na wala nang magaganap na demolish dahil tinanggal na namin ang kabilang side ng kampuhan” (We thought that there would no longer be a demolition because we have already agreed to remove the other tent, referring to the one found at the right side of the South Gate of Batasan Complex.) Ramos said. “Kaya nagtataka kami nang biglang dumami ang pulis at dumating ang bombero” (So we were very surprised when more police officers and fire fighters came.) 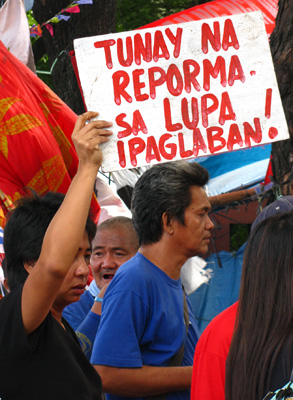 (Photo by Glaiza May Mozones)

The tension heightened when a group of men inside the House of Representatives pointed their high-powered guns at the participants of the camp-out. “Dapat yun ang alamin ng police leaderships (kung sino ang mga iyon)” (Police officers should investigate the identity of these men) Ramos said.

Anakpawis(Toiling Masses) Rep. and KMP Chairperson Rafael “Ka Paeng” Mariano confirmed that there were nine people injured from tension during the dispersal. 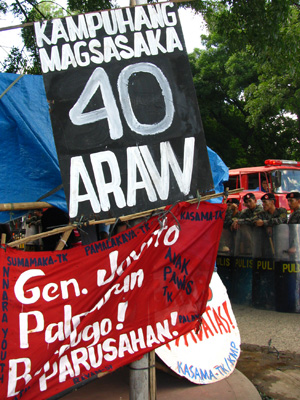 (Photo by Glaiza May Mozones)