MANILA — After six months of waiting and endless follow-up with different government agencies, the remains of an overseas Filipino worker that had been frozen in Saudi Arabia during that period, finally arrived in the Philippines this afternoon.

A native of Misamis Occidental, Emy Pepito worked as a stonemason in Saudi Arabia with dreams of providing a better future for his mother and nieces. But after just four days of working in Jeddah, he died on Nov. 12, 2008, when he was buried alive in boiling asphalt mixed with sand while working at a construction site. 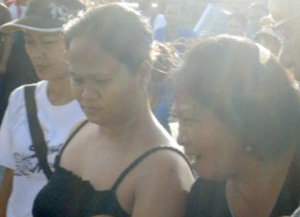 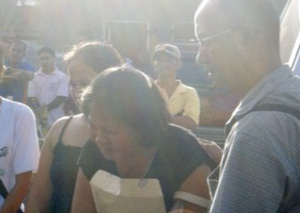 Upon learning of Pepito’s death, his family immediately sought the help of the Department of Foreign Affairs to process the release of the remains, but to no avail. Left with no choice, the family coordinated with Migrante, an organization dealing with issues confronting Filipino migrants.

Together with Pepito’s families and supporters, Migrante held rallies and pickets to call the attention of the government. And after six months of waiting and dealing with the DFA, the Overseas Workers’ Welfare Association (OWWA), and the Philippine Overseas Employment Administration (POEA), Pepito’s body was received by his family and Migrante officials.

A wooden box with his body in it arrived at 1:00 in the afternoon on Monday at the Ninoy Aquino International Airport. Upon seeing the box that carried Pepito’s body, Elizabeth, the mother, and Charito, a sister, cried uncontrollably.

According to Garry Martinez, chairman of Migrante International, they managed to talk with the officials of OWWA to fulfill the last wish of Pepito’s family to bring him home.

“We’re sad because the Pepito family is now heavily indebted because of the tragedy. We had to do a lot of paperwork to get this done,” Martines said in an interview.

Although the family was able to get the support of OWWA for the funeral service and the family’s fare back to Misamis Occidental, they weren’t able to claim the 220,000 pesos (or $4,677.17 based on the current exchange rate of $1=P47.037) “work-related death” benefits because they could not find Pepito’s wife, Annaly Rizentes of Zamboanga Del Norte, who is one of the beneficiaries aside from his mother.

A prayer was offered by Migrante International before the body was brought to a Philippine Airlines plane for a connecting flight to Misamis Occidental. (Bulatlat.com)