According to Palatino, half of the unemployed in the country belong to the youth sector. One-third of newly graduates do not immediately get employed.

“If we have a good quality of education in elementary and high school, not all youth need to enter college. In other countries you can still be employed even if you just finished high school. In our country, you need to finish and have a college degree for all kinds of available decent jobs,” said Palatino.

Under-Investment of the Government

Palatino also criticized the low budget of the national government for the education sector. “In other countries, tertiary education is highly subsidized by the state. In the Philippines, higher education is dominated by the private sector,” he told Bulatlat.

Palatino said that the ideal spending on education should be 18 to 20 percent of the national budget, but the average spending on education in the Philippines is only 13 percent. The amount is equivalent to only 2.3 to 2.4 percent of the Gross Domestic Product (GDP). This is way below the prescribed standard of the United Nations Educational, Scientific and Cultural Organization (Unesco), which states that six percent of GDP must be allotted to education. 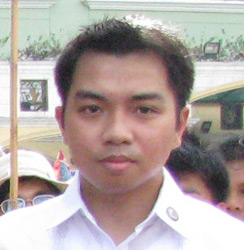 Kabataan Rep. Mong Palatino: Half of unemployed are young Filipinos. (Photo by Glaiza May Muzones)

Because of the limited budget given to public schools, the funds provided for the facilities, salary of teachers, learning materials, and even school feeding programs are also inadequate, Palatino said.

He said that despite the free tuition in public schools, it would cost around P15,000 ($316.78) to P20,000 ($422.38) to send a student to a public school. This amount covers the auxiliary needs of students that include school fees, books, school supplies, uniform, transportation, and food.

Due to the small allocation of budget in education, public schools are forced to collect fees for other services.

The three-year moratorium on tuition hike will serve as a temporary relief for students in accordance with the estimate of the National Economic Development Authority (NEDA) that the current economic crisis would last for three years.

The bill is pending in the Lower House.

For now, Glenn, like many other Filipino youth, will have to strive on his own to realize his dream. “I want to go back to college and receive a diploma,” he said. (Bulatlat.com)