Satur Ocampo: A Tribute and a Promise

MANILA — It was a rare occasion that brought together some of the Philippines’s well-heeled and multitudes of the unshod, activists young and old, ex-activists and non-activists. For those who had not had the good fortune of hearing about the man even in this age of information technology, the event served as more than a basic introduction to veteran activist Satur Ocampo, who currently represents Bayan Muna (People First) at the House of Representatives together with Teddy Casiño and Neri Javier Colmenares.

Directed by Joel Lamangan, the event — dubbed Satur: A Tribute and held last May 28 at the University of the Philippines (UP) Bahay ng Alumni – was a celebration of Ocampo’s 45 years of service to the Filipino people, as well as a belated celebration of his 70th birthday. 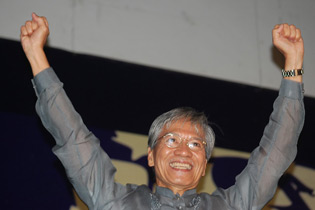 Listen to relatives and friends paying tribute to Ka Satur

Ocampo was born on April 7, 1939, in Sta. Rita, Pampanga, the fifth of 12 children of a landless peasant couple. A consistent honor student in his elementary and high school days, he had wanted to be either a priest or a doctor, but things happened differently for him. He took courses at the Philippine College of Commerce (now the Polytechnic University of the Philippines), the Lyceum of the Philippines, and the Manuel L. Quezon University before landing a job as a business reporter for The Manila Times, where he would eventually become the assistant business editor.

At the same time that he was working as a journalist, Ocampo was early on involved in progressive politics. In 1964, he was among the founding members of the Kabataanmg Makabayan (KM or Patriotic Youth). A few years later, he became part of the National Council of the Movement for the Advancement of Nationalism (MAN). From 1970 to 1972 he served as vice president of the National Press Club, and was part of a group that aligned the NPC with the protest movement.

He disappeared into the revolutionary underground movement following then president Ferdinand Marcos’s declaration of martial law in September 1972. He became part of the preparatory committee of the National Democratic Front of the Philippines (NDFP), which sought to unite various anti-dictatorship forces. He was one of the drafters of the NDFP’s original 10-point program, together with Antonio Zumel, Enrique Voltaire Garcia II, Angel Baking, Simeon “Sammy” Rodriguez, Dante Simbulan, and Jose Maria Sison.

In 1976, he was arrested in Olongapo City, Zambales, and was heavily tortured for several weeks. He was charged with rebellion and tried by a military court, but was never convicted of any offense.

In 1985, he acquired a pass to vote at the NPC elections. On this same occasion, he escaped his military guards and disappeared back into the revolutionary underground.

After the fall of the Marcos dictatorship in 1986, the Aquino government called for peace negotiations and Ocampo surfaced as spokesman of the NDFP peace panel. The peace talks collapsed following what is now known as the Mendiola Massacre of Jan. 22, 1987, and Ocampo returned to the underground.

He was arrested in 1989 together with his wife Carolina Malay, but was released in 1992, a year after Malay was freed.

After that Ocampo worked with various people’s organizations and human-rights groups, while at same time writing columns, analyses and commentaries for the Philippine News and features (PNF) and several other news outfits and publications.

In 2001, Bayan Muna topped the race for party-list seats, with Ocampo as its first nominee. He served another term as Bayan Muna representative from 2004 to 2007, and is now on his third and last consecutive term as a member of the House of Representatives.

During its launch last April, the coalition party Makabayan announced Ocampo as one of its four initial senatorial candidates for the 2010 elections.

During the tribute for Ocampo, journalist and former activist Joanne Maglipon described Ocampo as one of those rare individuals “destined to be icons.”

Fr. Herminio Ricafort SVD, a childhood friend of Ocampo, and women’s rights advocate and former political detainee Nelia Sancho praised him for his consistency in his pursuit of the people’s struggle. Edita Burgos, widow of activist-journalist Jose Burgos Jr. and mother of missing activist Jonas Burgos, extolled Ocampo’s courage even in the face of adversity as well as his compassion for the victims of human-rights violations.

Luis Jalandoni and Coni Ledesma of the NDFP peace panel hailed Ocampo for consistently carrying the people’s interests in his life and work.

The same event was also an occasion for explaining why Ocampo should run for the Senate.

“The Senate needs some kind of dissenting voice,” said Philippine Daily Inquirer columnist Amando Doronila, who was Ocampo’s colleague at the NPC, in a video message.

“We have not had a nationalist senator for a long time,” said Quezon Rep. Erin Tañada. “It is high time that there be another nationalist in the Senate.”

“He is a man who has kept a good record and deserves to be promoted to the Senate,” said former Vice President Teofisto Guingona Jr.

His son, Antonio, confessed about their family’s desire that Ocampo be able to retire already. “(But if) Tatay chooses to serve the people more, we are ready to accept – if not embrace – this challenge,” the younger Ocampo said.

In his response to the testimonies and sharing, the elder Ocampo said he cannot “refuse” those who are clamoring for him to seek higher office. He railed against the ruling elite and foreign interests. “Habang di natin natitinag ang paghaharing iyan, asahan niyo kasama niyo ako sa harapan man, sa gitna o likuran,” Ocampo firmly said, eliciting a deafening cheer from the crowd. (Bulatlat.com)