These are predicaments that MRL Gold exploited, Damaso said. “MRL Gold wants the local people to be indebted to them,” he said, adding that the company offered livelihood trainings and loans with no interest to the residents of Lobo. Some residents claimed their parish received P200,000 ($4,223 at the May 30, 2009 exchange rate of $1=P47.35) as “donation” from the mining company.

But there are those who are genuinely concerned about the dim future that awaits Lobo once the mining operation begins. The fact-finding team was informed that a group of farmers had filed a petition to stop the exploration activities of MRL Gold. They were, however, summoned to the municipal hall and were told that what they did was illegal, Damaso said, quoting the residents. Scared, the farmers retracted their sworn affidavits. They also sent a letter of apology to the municipal government explaining that they had not thought carefully of the consequences of the petition. 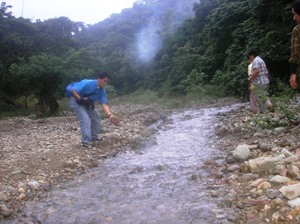 Members of a recent fact-finding mission collecting water samples from water coming down from Mount Banoi. (Photo courtesy of Bukal)

MRL Gold still has two years before the exploration license will expire. It may not be much time but concerned residents and organizations are determined to continue their campaign against mining. In the last day of the fact-finding mission, Bukal and Kalikasan had the opportunity to talk with Batangas Governor Vilma Santos-Recto. Damaso said that Recto asked for a copy of the results of the mission, saying that she does not yet know what to do and where to begin.

The entry of a foreign-owned mining company into Lobo is a result of the Philippine government’s campaign to open up mining, often disregarding local concerns and opposition.

The Philippines, like all the countries located within the Pacific Ring of Fire, has abundant gold deposits. Various studies prove that frequent earthquakes that cause seismic activities of colliding and moving tectonic plates and active volcanoes that generate fast chemical reactions are essential to producing valuable minerals, making the Philippines a good place to invest for the mining industry.

The mining industry in the Philippines boomed from 1974 to the 1980’s. But the increasing cost of production has led to the decreasing demand for gold in the world market. This also caused a shift from the practice of underground or tunnel mining to open pit mining, a method that involves the blasting and flattening of mountaintops to extract gold. It is a method that resident sof Lobo are afraid might happen to their town.