The landlord-dominated Congress, led by the relatives of President Arroyo, voted Wednesday night to add five more years to the implementation of a 20-year-old agrarian-reform program that has failed to uplift the lives of peasants and farmers in the Philippines. And critics say the new proposed law is even worse than the original.

MANILA – A day after members of the House of Representatives approved a resolution that would pave the way for the possible extension of President Gloria Macapagal-Arroyo’s rule, they passed on third and final reading a controversial bill extending the implementation of the Comprehensive Agrarian Reform Program – a bill that progressive partylist legislators had rejected for being anti-farmer, pro-landlord and worse than the original.

Led by the four relatives of President Arroyo (her two sons, her brother-in-law and sister-in-law), 211 legislators voted “yes” to House Resolution 4077, or the Comprehensive Agrarian Reform Program Extension with Reforms (CARPER), 13 voted “no,” and only two abstained.

The bill intends to extend by five years the original Comprehensive Agrarian Reform Program (CARP). However, critics say CARPER is worse than CARP because it only reinforces the pro-landlord orientation of the original law. 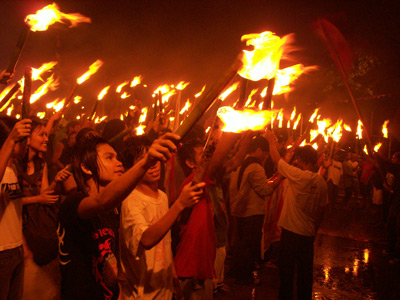 Among those who defended the bill and voted for its passage were principal authors Rep. Edcel Lagman of Albay and Rep. Risa Hontiveros-Baraquel of the party-list group Akbayan. Rep. Jun Alcover of the partylist and anti-communist group ANAD praised the CARPER bill, calling its passage a “victory for farmers and democracy.”

The CARPER’s approval is sure to stoke the anti-Arroyo fire created by the approval Tuesday night of the resolution that would convene Congress into a constituent assembly so it can amend the Constitution.

Already, farmers’ groups have lined up protest actions against CARPER, with one protest march scheduled today, Thursday, from the Department of Agrarian Reform office in Quezon City to Mendiola, where farmers calling for a genuine agrarian-reform program had been shot and killed.

“If CARP is extended, would it distribute the lands of the Arroyos to farmers?” Anakpawis Rep. Rafael Mariano asked his colleagues shortly before the bill was approved through nominal voting before midnight Wednesday. Some members of the Arroyo clan had been resisting the implementation of CARP for years, as do many of the country’s landowners. 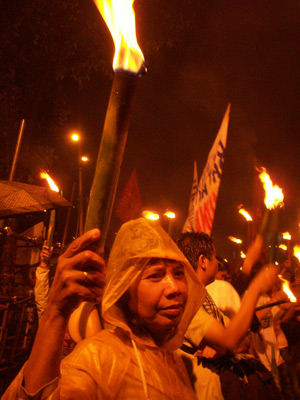 CARP, Mariano added, “was used only to reconcentrate the land of a few landed families,” referring to loopholes in the original law that allow landowners to circumvent the program, for instance by turning their farmlands into non-agricultural property.

Kabataan Rep. Raymond Palatino said CARP “failed our farmers.” He said — by way of explaining his “no” vote — that he could find no “just and righteous reason to extend a bogus land program.”

Bayan Muna Teddy Casiño called CARP “heartless and soul-less.” He pointed out that even Lagman, the principal author of CARPER, had admitted that the proposed new law “will not correct the congenital defects” of CARP. “By extending the life of a zombie agrarian-reform program, we are repeating the sin of the 8th congress,” Casiño said.

CARP, passed in 1988 as part of President Corazon Aquino’s so-called social-justice program, has largely been a failure. The extensions it has been given, including the one under CARPER, only underscores this.