You Are Here: Home → 2009 → June → 7 → Bulatlat to Harness the Internet, Multimedia Tools for Coverage of Cha-cha Protests

Bulatlat to Harness the Internet, Multimedia Tools for Coverage of Cha-cha Protests 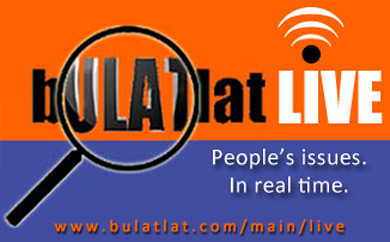 For its debut coverage, Bulatlat Live will cover the protests on June 10, Wednesday, against charter change. From Makati City, where the main rally will take place, to several key areas across the country, Bulatlat’s pool of editors, reporters and correspondents will provide updates and breaking news — text, images, audio and video — either in real time or immediately after they occur.

On Bulatlat Live’s page, updates will be integrated with Cover It Live!, a live-event application that is changing the way online news sites cover important events. Here, news and updates will be delivered through Cover It Live! and Twitter minutes, even seconds, after they happen. (Bulatlat’s Plurk and Facebook accounts will be automatically updated throughout the coverage.)

Audio and video clips of the rally will be uploaded a few minutes after recording and can be played immediately on the Bulatlat Live page.

Pictures of the protests, many of them to be sent from other areas in the country, will likewise be uploaded, courtesy of Picasa.

Finally, we will also cover the protests and provide commentary via a live audio webcast on the Bulatlat Live page. (Bulatlat.com)