The Office of the Solicitor General told the Court of Appeals that the abduction and torture of Melissa Roxas are nothing but mere fabrications to embarrass the government. Her recent press conference in Los Angeles, it says, was part of the plot. The victim’s lawyers and supporters, however, say the government is just trying to evade responsibility.

MANILA — A day after Melissa Roxas recounted her ordeal in the hands of her captors, the Office of the Solicitor General (OSG) reiterated the government’s claim that the abduction and torture of Roxas had been “stage-managed.”

Roxas, a 31-year-old American of Filipino descent, and her two companions — Juanito Carabeo and John Edward Jandoc — were abducted May 19 by suspected military men in La Paz, Tarlac. Roxas was surfaced six days later. Through Karapatan legal counsel Rex Fernandez, Roxas filed a petition for writ of amparo before the Supreme Court a day after she went back to the United States. 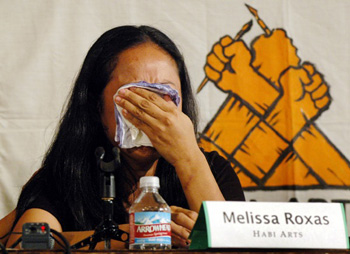 Melissa Roxas during her press conference in LA on Sunday. Note the abrasion mark on her left wrist caused by the handcuffs. (Photo by Jay Davis)

“It is still our conclusion,” State Solicitor Bernardo C. Villar said during the second hearing on the petition for writ of amparo. The government had earlier said, even before an investigation was concluded, that the abduction and torture of Roxas was “stage-managed” by leftist group Bayan and the communist New People’s Army to embarrass the Arroyo regime, which is being hounded by allegations of human-rights abuses on a massive scale.

“The [Roxas’s] petition and the appended documents point toward the possibility of a stage-managed event to achieve the spectacular and theatrical results that would put in a bad light the government itself but at the same time achieve great media mileage or otherwise give the petitioner and her group undeserved political capital,” Villar said earlier.

“As we have been saying, they want to blow up” the issue, Villar told the court in the recent hearing, referring to news reports about Roxas’s press conference in Los Angeles, California, Sunday.

“The petitioner finds some other avenues to seek favorable ruling. With due respect, this will be an insult to the jurisdiction of the honorable court,” the government lawyer said.

But Justice Noel G. Tijam of the Special 16th Division of the Court of Appeals told Villar that the court cannot prevent anyone from conducting press conferences.

“Probably, she’s been praying for that,” Villar said, referring to the news reports. “Can we take her words in all seriousness?” he added.

Tijam said it is up to the court to discern whether Roxas is telling the truth.

Associate Justice Arturo Tayag asked Roxas’s counsel, Rex Fernandez, if he had prior knowledge of the press conference. Fernandez said he was informed two days before. “I advised her to come out. As a human-rights lawyer, I know that to resist and expose what has been done to her would be therapeutic,” Fernandez said.

One of the doctors who examined Roxas testified in court that the physical injuries were results of torture and not of anything else.

Doctors Geneve Rivera-Reyes and Reginaldo Pamugas examined Roxas on May 26, around 10 a.m., a day after the victim was released by her abductors.

A medical certificate signed by the two doctors states that Roxas sustained multiple abrasions and is suffering from acute stress disorder. The abrasions were found on Roxas’s knees and wrists.

“I could not imagine someone scratching her knees and acquiring those abrasions,” Reyes said when asked by Tijam if she thought the injuries are self-inflicted.