A Proud Day for Gays in the North

BAGUIO CITY — As onlookers watched, the members of Baguio Pride Network marched along Session Road on June 28 to commemorate the Stonewall riots and to call for an end to homophobia and discrimination against the lesbian, gay, bisexual and transgender (LGBT) community.

The Stonewall riots were a series of demonstrations against a police raid that took place at the Stonewall Inn, a gay bar at Greenwich Village, New York City, on June 28, 1969. The riots are then marked as the first instance in American history where people in the LGBT community fought back against a government-sponsored system that persecuted sexual minorities. It has also become the defining event that marked the start of the gay-rights movement in the US and around the world.

For Mervin (not his real name), a second-year student at the University of the Philippines-Baguio, joining the parade is a personal landmark since he came out recently. For Mervin, the parade also serves to broaden the public’s thinking not just about the LGBT community but also about the issues of discrimination and acceptance. 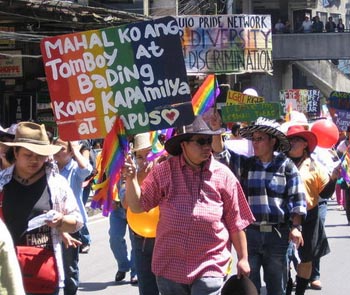 Members of the LGBT community in the streets of Baguio: Taking a stand against discrimination (Photo by Joan Garcia / bulatlat.com)

Although Mervin holds out a sign declaring “It’s OK to be gay,” he still shied away from cameras. He said he was afraid that his mother would see him although he already summoned the courage to tell her during their last conversation. The only son of a Kankanaey father and Ilocano mother, Mervin knows how difficult it is to be gay, especially since he is also an activist. As his mother puts it, “Aktibista ka na nga, bakla ka pa.”

Mervin explained he finally accepted his being gay when he realized that, while he participates in the fight for freedom of the Filipino people from oppression, he had not yet freed himself. He then sought the help of friends, gays and straight alike, regarding his coming out. He also gained strength from mass leaders who he knows are gay and are still being listened to by people because of the issues that they are discussing, regardless of their sexual orientation.

When he finally did come out, he realized that he was more open and happier about himself. 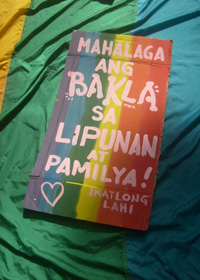 Mervin said a long process of cultural transformation is needed so the larger community can finally accept the LGBT community. The people still need to be educated not just on the issues of homosexuality but on class discrimination as well.

For Myke Sotero, interim pastoral leader of the Metropolitan Christian Churches (MCC)-Baguio, joining the parade was also an opportunity to tell the LGBT community that they are not sinful.

Sotero explained that the MCC was organized for members of the LGBT community who have been turned away from their churches because of their sexual orientation. He gave as example the transvestites who are prohibited from entering their respective churches when dressed in their usual attire.

A more personal experience for Sotero was when he married his partner last 2003 under the Order of St. Aelred, a Catholic denomination headed by Fr. Richard Mickley. Then Baguio Bishop Singson of the Catholic Bishops Conference of the Philippines (CBCP) issued a pastoral letter condemning the marriage of Sotero and gay marriages in general. (Read sidebar on Myke Sotero)

Sotero said the Church should foster love and not prejudice, and that there are members of the LGBT community who are deeply religious. Their belief was aptly exclaimed by a placard that read, “Would Jesus discriminate?”

The parade was the culmination of a series of activities that commemorated the Third Baguio LGBT Pride Week with the theme “Life, Love, Freedom. One Pride, One Struggle.” (Bulatlat.com)