Gay Love and Faith: In Search of a Non-Discriminating Church

BAGUIO CITY — It is never too late to join the priesthood for someone who wanted to pursue changes in the Church.

At 41, Myke Sotero is pursuing his yearning to serve the Church as a priest. His former colleagues and friends thought he was not serious about it. Sotero finished a four-year course in journalism in 1998 and worked as a medical representative before joining nongovernment organizations. He worked full-time with NGOs working for social change through the arts and culture and, lately, joined the bandwagon of call-center agents.

Everyone knows this seminarian is gay.

Clad in a white habit, Myke joined the June 28 parade organized by a network of lesbians, gays, bisexuals and transgenders (LGBT). Many onlookers thought he was just another homosexual clad in a religious costume. He distributed a statement questioning the traditional Church’s sincerity in teaching love amid their hatred for LGBTs and their refusal to accept gays entering the priesthood.

Myke’s placard that read “Homosexuality is not a sin. God is not homophobic, why should we?” spoke a lot about his convictions. 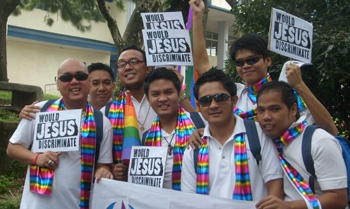 Members of the MCC in Baguio City. (Photo by Joan Garcia / bulatlat.com)

His message is loud and clear. Without pretense or malice, Myke simply asserts his right as a gay man before the church, which is supposedly promoting equality among men, and women.

“What are the sins of gays?” Myke said, verbalizing what other LGBTs have been thinking of when the Catholic Church recently issued a pronouncement frowning at gays participating in the Santacruzan, the traditional annual religious procession of Catholics.

“Christ himself was with sinners during his journey. He never discriminated against anyone,” Myke added.

Myke and 10 other gays founded the Metropolitan Community Church of the Philippines (MCC) in Baguio City. It is a house church, according to him.

“It is a place for gays to practice their faith without hiding their sexual identity or preference. There, we freely worship the Lord without fear of discrimination,” Myke explained.

According to Myke, MCC is a church for all: lesbians, gays, bisexual, transgender, transexual, transvestite, and straight too. He said the MCC also officiates marriages.

“Countless couples have undergone the holy union under the MCC,” Myke said when asked about how people accept the idea of same-sex marriages.

On his first year at the Ecumenical Theological Seminary (ETS) here, 246 kms. north of Manila, Myke appears he has finally found his calling.

This early, Myke realized there are many open-minded seminarians. He had a chance to explain to them what MCC is all about and is happy to feel no discrimination.

It was Richard Mickley, an American priest, who officiated Sotero’s holy union with the late Jon Salazar on Nov. 24, 2003 in Baguio City. Myke said the union was a celebration of his commitment to Jon and Jon to him. True to their words, their union ended only when Jon died.

Myke is now in another serious relationship with Jojo Rugay.

“The holy union between two loving gays is not recognized by Philippine laws,” Myke said. Nevertheless, he said, their marriage under the MCC reassures them. “What is important is that there is a responsible, loving relationship between the two,” he added.

Myke still looks forward to a day when prospective seminarians in all churches would not be rejected nor kicked out of the seminary on the basis of their sexual preference. (Bulatlat.com)