MANILA — State colleges and universities are a lifeline to Filipino families with meager income but whose students are eager to finish their education. The conventional wisdom is that these institutions are not as rapacious as their private counterparts in increasing tuition and other fees.

In fact, state colleges and universities have behaved no differently. One of them, the Eulogio “Amang” Rodriguez Institute of Science and Technology (Earist) in Sampaloc, Manila, has increased its tuition since 2007 by a whopping 566 percent – from only P15 per unit to P100 per unit.

As if this increase were not enough, the students at Earist were confronted with the prospect of paying a P500 “developmental fee” on top of the tuition and other fees paid during enrolment.

“The tuition fee hike last 2007 is a burden that they imposed on the students and their families and they can no longer take another P500,” said Julie Ann Gebilaguin, editor-in-chief of Technozette, the college paper. 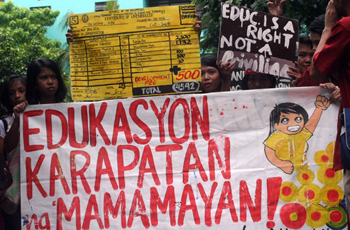 Earist’s Dean of Instruction Noel Cabrera told Bulatlat that the “developmental fee” is their response to the need of their university to improve their facilities and be accredited later on, saying that, upon implementation, the students are the one to benefit from this fee, not the administration.

But in a statement issued by various students group, the students expressed skepticism at Cabrera’s assurances. They cited the tuition increases since 2007, which they said have not resulted in any significant improvements in the school. The only improvements that have been done are new paint on buildings, a butterfly garden, fishpond, an air-conditioned cafeteria and a fountain that is currently being installed beside the gym. “But our classrooms remains poorly ventilated, overcrowded, have limited capacity for students, blackboards that needs to retire and untidy restrooms for each colleges,” the statement said.

But Edward Pastor, secretary-general of Stand-Earist, one of the groups that signed the statement, insisted that the fee did not go through a democratic consultation. He said that in a dialogue between the student leaders and administration prior to the general assembly, they agreed that the fee would not be discussed during the coming general assembly.

Pastor said they were surprised to hear that it was the main the topic of the said assembly. “This is a big deception that they have played upon the students who knew what the issue was all about but were not present in the assembly. The same goes to the parents whose mere presence was equated by the administration as an approval for the P500 developmental fee,” Pastor said.

Gebilaguin, the student editor, said that the school administration should never pass its responsibility to students in rehabilitating the school facilities because it is their duty to provide these. 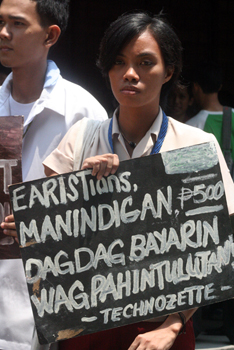 Earist students claim the school has not made any significant improvements. (Photo by Janess Ann J. Ellao / bulatlat.com)

To show the students’ indignation regarding the proposed P500 “developmental fee,” the Student Alliance for the Advancement of Democratic Rights-Earist and Technozette held a protest action last July 7 at the Earist main building in front of nearly 150 students.

The students watching the short program cheered and chanted their response to the leaders’ speeches criticizing the fee. They raised small red banners that said “No to P500 Developmental Fee.” Pastor said that this is the first time in almost 10 years that students in Earist staged a protest action inside the school grounds.

Around four school administrators came to the rally and negotiated with the students while Earist security guards prevented other students from joining the protest actions inside the school grounds by locking the gates. Police officers and security groups from the city trooped to Earist, saying that they would only move if violence occurs.

“We have noticed that since the immense protest actions from the students during the 2007 tuition fee hikes, the presence of police officers in our school vicinity has been very obvious. During protest actions we also notice that they keep on bugging members of the press to get the side of the school administration,” Gebilaguin said.

Gebilaguin said that they are also taking precautions that only members of the press can take their pictures while protesting. “There are people who take pictures of us in an effort to identify the students who are against unfair school policies,” Gebilaguin said.

Alvin Peters, national president of National Union of Students in the Philippines and co-convenor of the Kabataan Kontra Cha-cha, said that increases in tuition and other fees are one of the issues in colleges and universities that need to be addressed. Peters said he fears that the amendment of the Constitution would make social services such as education more exposed to exploitation because of the move to allow foreigners 100-percent ownership of businesses.

Peters said deregulation, privatization and foreign exploitation will make social services such as education mere businesses. “The current tuition and other fees increases shows that liberalization and deregulation are no longer a speculation once the Constitution is amended,” he said.

At around 10 p.m. Tuesday, Pastor told Bulatlat that the school, because of the protests that stopped classes for nearly two hours, has decided to suspend the implementation of the P500 fee.

“This only proves that there is success in the collective action of the students who participated in the protest,” Pastor said. (Bulatlat.com)