Salem said Brocka created films in a period of history in which the Filipino people are faced with abject poverty, desperation and misery — a time not unlike the present.

Considering the call for entries was opened for just a short time, the number of submissions was overwhelming, according to Salem, noting that the themes are very varied.

More than 50 filmmakers submitted entries while more than 70 films were screened.

Some films were already screened internationally. Some were made by established video groups.

One such film is Dada Docot’s Performing Naturalness, a short film that was screened recently at the New York Indiobravo Film Festival. This three-minute film is about a young woman who documented the frequent questioning of immigration officers about her stay in Japan as an alien. Docot is the winner of the grand prize at the University of the Philippines Centennial Filmmaking Competition for short/experimental films. 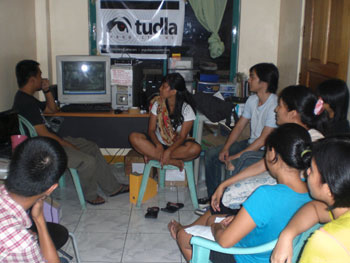 Another film among the entries that has garnered international exposure is Aissa Panafiel’s Long Live the Fearless Man, which won in the United States State Department-sponsored Democracy Video Challenge earlier this year.

Another festival entry is Padre de Pamilya by independent filmmaker Cesar Buendia, which has been shown commercially. Focused on corruption in mainstream politics, the film stars Ariel Rivera and Tessie Tomas.

On the new media category, even the popular group Gloc9 submitted a music video as an entry. Now popular in the airwaves, Gloc9’s Upuan is directed by Jay Pacena.

Another music video submitted is a rendition of Yano’s Esem by a student of Ateneo de Naga, which shows the contrast between the culture of malling and the people living outside the mall.

Diagnosing Poverty, Building Community is about two Manila doctors who chose to serve a Lumad community in Mindanao. It is the entry of Kodao Productions, one of the more experienced video groups that joined the festival.

Wala ng Balikbayan, a documentary by Ilang-ilang Quijano, a journalist for Pinoy Weekly, on the toll of migrant labor on Filipinos is also one of the films on exhibition.

Mayday Productions’ Ka Bel, on the other hand, is about the legendary labor movement’s leader Crispin “Ka Bel” Beltran who lived a well-lived life serving the masses. He died as one of the representatives of Anakpawis Partylist and a hero to the Filipinos.

The festival, which will open in UP on Aug. 5, also features lectures, workshops and exhibits with known figures on contemporary art and cinema like UP College of Mass Communication dean Roland Tolentino, award-winning writer Ricky Lee and acclaimed directors Joel Lamangan and Carlitos Siguion-Reyna.

For Tudla Productions, the festival is just a beginning of yet another challenge to artists and filmmakers to constantly ask themselves the question: For whom are they creating? Mercado said.

Moreover, he said Pandayang Lino Brocka is also aimed at contributing to the wide national-democratic movement for an art that is not only free but as an instrument for liberating the people. (Bulatlat.com)