Melissa Roxas: A Painful Journey from Home and Back

Breaking News: Melissa Flies Back to Philippines on Monday to Pursue Case Vs Military

Having to leave the Philippines for the United States when she was nine years old was a particularly painful experience for Filipino-American Melissa Roxas. Her desire to trace her roots brought her back to the country of her birth where, in May, soldiers kidnapped and tortured her for days.

LOS ANGELES, California — As a Filipino who migrated to the United States to follow her mother when she was very young, Melissa Roxas remembers the pain of having to leave the Philippines. That pain stayed with her even as she later came to understand that what her mother did was in pursuit of a better life, a decent life that had proved elusive to them and to millions of others in their native land. Growing up, she always wondered why they had to be separated from their loved ones.

Her mother was the first in their family to migrate; she followed soon after. Melissa, a native of Manila, arrived in the US in 1986, when she was just nine years old.

She still has memories of her sporadic bouts of rage in the period between her mother’s departure and their reuniting. 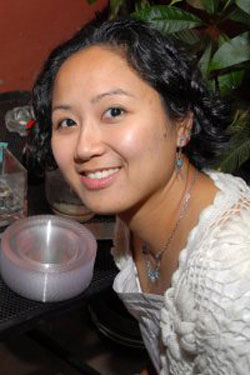 “I remember feeling really torn… and have very vivid memories of actually screaming at every airplane… in the sky as I was thinking of my mother, and when we were reunited, I felt very isolated because the rest of the family was out there,” she said in a recent interview with Bulatlat in Los Angeles, where she grew up.

Going to school in the US, she would eventually acquire a sharp awareness that she was somehow different from other Americans. She spoke about students forming cliques based on race or color — and then asked for a pause in the interview.

She nonetheless was able to make friends even with people from different races, she said after the interview resumed.

In high school, in particular, she had many Latino friends. This, together with her readings – she was a voracious reader very early on – piqued her interest in Latin American culture, an interest that took her on exchange programs to Chile and then Mexico, where she came to learn about human-rights issues.

Her heightened awareness of Latin American history and culture eventually provoked in her a desire to go back to her roots in the Philippines.

She went to college at the University of California, San Diego, where she took a BS in Animal Physiology and Neuroscience and, later, a BA in Third World Studies with a minor in Health Care and Social Issues.

While in college, she began volunteering for community organizations advocating the rights of the youth, the homeless and the elderly. Later on, she would become involved with Filipino organizations aligned with the Bagong Alyansang Makabayan (Bayan or New Patriotic Alliance), the Philippines’s largest progressive group. Melissa, who is also a poet, would become a co-founder of the cultural group Habi Arts together with the late painter Papo de Asis and a few other US-based Filipino artists.

The Los Angeles-based Habi Arts, in turn, would, in 2005, become a founding member of Bayan-USA.

That same year, Melissa was among the organizers of a Bayan-USA contingent to the International Solidarity Mission (ISM) to the Philippines, a fact-finding mission that investigated the rampant human-rights violations, particularly the extrajudicial killings and enforced disappearances.

Two years later, she decided to go back to the Philippines, this time as a full-time activist doing human rights and community health work.

In April this year, she took part in a survey of several communities in La Paz, Tarlac, for a future medical mission.