What’s Cooking in Malacañang? GWaPa Tries a Dash of Deception, an Ounce of Repression

After careful preparation and once the flavor tasted right, GWaPa said Con-Ass will likely be expressly served on the table. 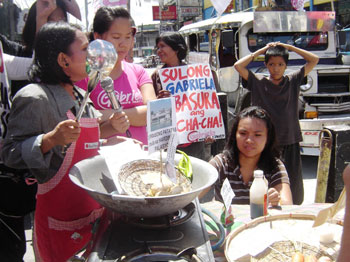 Binuyangyang, on the other hand, shows the government’s 100-percent surrender of the country’s natural resources to multinational corporations and foreign investors. Its ingredients include 2 tablespoons of “greasing” congressmen, ½ kilo fat of Mike Arroyo, 1 packet of “real magic sarap (delicious)” collusion with foreign investors, 1 bunch of string beans of lies, 1 bouquet of squash flowers of plunder, 1 bitter ampalaya of people’s protests and ½ squash of oppression. 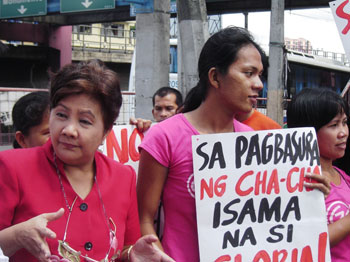 Binuyangyang is simply sautéed and served hot for the rich pigging out on power. Menudo is cooked after marinating all the pig and pork fat and adding the veggies and seasonings when all meats are done. Based on Arroyo’s style, Gabriela Women’s Party said it is usually served hot with plenty of swagger.

“All these are recipes of deception and exploitation,” said Gabriela Rep. Liza Maza. Fellow solon from Gabriela, Luz Ilagan, said only Arroyo and her cohorts would partake in their gluttonous banquet.

The two solons announced they will boycott Arroyo’s ninth and final state of the nation address on July 27. Instead, they would join the nationwide protest calling for Arroyo to stop all schemes to prolong her stay in power and sell Philippine sovereignty to foreign interest. (bulatlat.com)