MANILA — The State of the Nation Address (Sona) in many years has become a fashion event for legislators, their spouses and families. Touted to celebrate local fashion, even the media makes a staple of it and allots a special place in their coverage to have the attendees explain their outfits in a red carpet spectacle. Strangely, there has been no respite in this kind of ritual and excessive display even if the rest of the country is in deep poverty and the government itself purportedly urging austerity measures.

Congresswoman Liza Maza modestly and courageously chose to go against the fanfare and fabric of the Sona’s fashion sensibilities when she chose to wear her politically-inspired dress depicting a protest art which she calls the “true state of the nation.”

Her traditional off white terno is a made out of a lowly cheesecloth or “katsa”. Katsa is the material being used for flour sacks, as well as cheap baby diapers, bags or curtains. The lady lawmaker said she had intended to use the cloth for a curtain some years ago but instead has found better use for it in this year’s Sona. 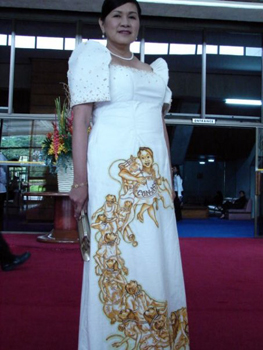 It may seem like a typical terno accentuated with glass and wooden beads strewn in its bodice, but its statement goes down its skirt – a visual critique of Arroyo’s relentless pursuit of charter change.

A hand-painted image in gold of President Arroyo merrily crocheting a gold thread together with a swirling paper which reads “CON-ASS” hauls images of different people representing the masses entangled by her malevolent scheme. 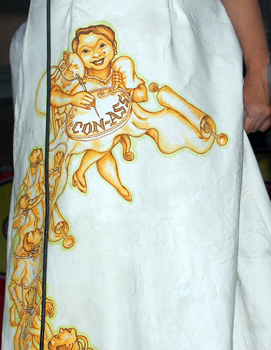 This hand painting was done by artist Boy Dominguez, a member of the Concerned Artist of the Philippines (CAP). Dominguez said the painting was inspired by one of his unpublished editorial cartoons. He said it was his first time to paint Arroyo not in a grotesque manner or in a cartoon. The intention was to portray Arroyo realistically and to note her creepy “happy glow” with the current state of politics while the nation is languishing in strife and discontent.

Maza said her terno is “very comfortable and cool,” and costs less than a sack of good-variety rice or some P2,000 ($41).

In 2003, while then President George W. Bush was addressing the Philippine Congress during his very brief state visit here, Maza also made heads turn with her dress with the slogan “ NO to US War “ embroidered across its back. (Bulatlat.com)