MANILA — The National Artist Award, much as it is a celebration of Filipino cultural pride and artistic achievements, has again become a cauldron full of lurid controversies. Though there had been some controversy in past conferments of the title, President Gloria Macapagal-Arroyo’s blatant political accommodation this year tainted the much-revered cultural institution, according to dissenting artists.

“There is a process that has to be followed, and that process should be respected by those in charge of giving the award,” said Bienvenido Lumbera, 2006 National Artist for Literature, told Bulatlat in an interview.

Lumbera was referring to allegations that Arroyo abused her presidential prerogatives and disregarded the time-honored and established process of choosing honorees. Those who benefited from this abuse are presidential adviser on culture and theater artist Cecile Guidote-Alvarez and comic novelist and film director Carlo J. Caparas. 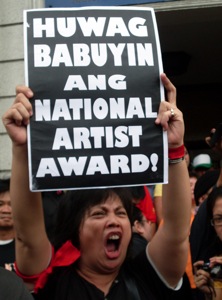 “The fact that there are people who were named as national artists without going through the proper process is an insult to all who have received and even those who have yet to receive the award,” said performing artist Mae Paner, a.k.a. “Juana Change,” in an interview with Bulatlat. “This is disrespectful not only of artists but also of culture.”

As a matter of course, clear-cut parameters guide the choice of national artists. A committee, composed of respected artists and cultural workers and jointly formed by the National Commission on Culture and the Arts (NCCA) and the Cultural Center of the Philippines (CCP), reviews and finally comes up with a shortlist of deserving artists from which the president decides her choice of awardees.

Those who made it to this year’s shortlist are Manuel Urbano, a.k.a. Manuel Conde (Film), Lazaro Francisco (Literature), Federico Aguilar Alcuaz (Visual Arts), and Ramon Santos (Music).

The controversy started when Santos was dropped from the shortlist to pave the way for Arroyo’s personal choices.

According to the rules, by virtue of presidential privilege, the president can only recommend and add one more artist to the shortlist. Instead, she dropped Santos from the NCCA-CCP shortlist and later unilaterally declared Alvarez and Caparas, along with fashion designer Jose “Pitoy” Moreno and architect Francisco Mañosa, as honorees.

Alvarez, aside from being Arroyo’s cultural adviser, is also the executive director of the NCCA. She is reported to have pushed for Caparas’s inclusion in the final list.

Both Alvarez and Caparas are known to be vocal supporters of the Arroyo administration.

Malacañang’s excuse is that it merely performed its “ministerial duties” in naming this year’s national artists. But it also noted austerity in the probable downsizing of nominees because of financial constraints.

Every national artist is entitled to a “medallion and citation; a one-time cash award of one hundred thousand pesos (P100,000.00) net of taxes; a monthly life pension; life insurance coverage (for awardees who are still insurable); a place of honor at state functions, national commemorative ceremonies, and other cultural events; and arrangements and expenses for a state funeral.”

Meanwhile, a posthumous award consisting of the medallion and citation and P 75,000.00 in cash shall be given to the deceased awardees’ nearest kin or a representative designated by the family.