MANILA — Former Navy officer Lt. Senior Grade Mary Nancy Gadian was recognized as a “Woman of Courage” by Gabriela, the most prestigious women’s group in the country, in a simple ceremony this afternoon. 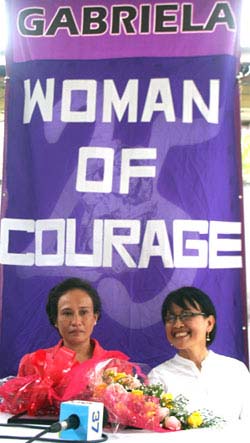 Gadian is the Navy officer who exposed the alleged malversation of P46 million intended for the Balikatan military exercises in 2007. Recently, she revealed the extent of engagements of American troops in the Philippines, underscoring, among others, the exploitation of Filipino women.

“Gadian chose to side with the people. She made a mark in history as the first Filipino officer to go against the interest of the United States military in the Philippines by exposing the atrocities in the US-RP joint military exercises,” said Emmi de Jesus, secretary-general of Gabriela.

De Jesus said Gadian affirmed that the Visiting Forces Agreement (VFA) “undermines the sovereignty of the country and violates the dignity of Filipino women.” 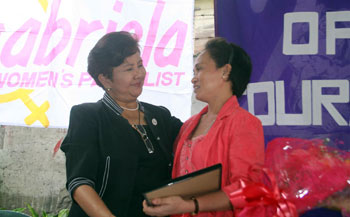 “To be a woman questioning men in authority because of corruption is the biggest challenge,” Gabriela Rep. Luzviminda Ilagan told Gadian. “That is what Nancy did. We salute you and we hope to emulate you. For us, you are a Gabriela.”

Gadian offered the award to all the women “who have been fighting for truth,” saying it is a recognition of them as well. (Ronalyn V. Olea / bulatlat.com)