The Soldiers Came, and the Classes Stopped

In a remote village in Samar, children are forced to go to school to another village, walking for hours to attend their classes, after the soldiers started coming in and committed atrocities. What happened to Bay-ang illustrates the extent militarization damages not just communities but the education of poor Filipino children, particularly in the countryside.

BAY-ANG, Western Samar — For four years, the school-age children and youths of this village were able to go to school when a teacher agreed to live in their remote, upland village. But when the soldiers came, the classes stopped. Persistent in pursuing their education, the youths of Bay-ang now have to walk hours to attend school in the next barangay.

One of them is Jennalyn Ellantos, who has to walk for two hours so she can attend classes in Matalod village. The difficulties, however, did not stop her from excelling — she finished first honor in her class last year.

Another Bay-ang resident, 16-year-old Ellen Dacles who is currently a Grade Six student in the same school, spends the week in Matalod, living in the home of a friend. “We bring with us food and rice that is good for one week,” Ellen said when this writer visited Bay-ang recently. She goes to Matalod every Monday with her one week’s supply of food and clothes, and comes home every Friday.

Other children walk for an hour at least to go to school to Hagbay village, which is nearer but is already part of another town, San Jose de Buan. Only multigrade classes for Grades One and Two are held in Hagbay.

From the San Jorge town proper, Bay-ang is accessible by a four-hour boat ride through the Gandara River, and an additional one-hour walk uphill, through mountain streams and across another wide, waist-deep river. A boat ride costs 500 pesos. 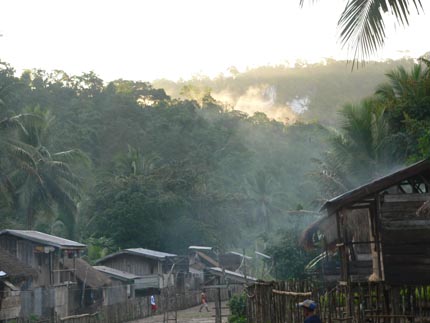 Among the clouds: A scene in Bay-ang, Western Samar (Photo by Dee Ayroso/ bulatlat.com)

The village of Bay-ang has only some 22 households, or a total population of more than 100, 60 of whom are school-age children and youths. In spite of its remoteness and small population, a teacher agreed to live in Bay-ang in 2002.

But the teacher only finished the school year 2005 to 2006, and discontinued classes when Bay-ang residents evacuated to avoid military atrocities.

Documentation by the human-rights group Karapatan and the Ecumenical Movement for Justice and Peace show that on Sept. 13, 2005, soldiers of the 34th IB led by Lt. Dexter Ocampo entered Bay-ang looking for New People’s Army rebels. The soldiers already had in tow two residents — Ludelo Gabiana and Rodolfo Lukaban — whom they accosted from another village the night before. The two were tortured and beaten up. Rodolfo was released when they got to Bay-ang but Ludelo was tortured for another day.

Then 17-year-old Jonard Dacanay had just arrived home from his farm when soldiers took him. The soldiers tied Jonard up and took him to an empty house where he was tortured and then transferred to another house where the soldiers beat him up again. Eventually, the soldiers took Jonard and forcibly used him as guide in their military operations in other communities. A soldier identified only as Yanyan Ortiz then took Jonard home where he was given work as helper in a fishing vessel.

Jonard was able to return only after several months when his mother and village mates went to the 34th IB headquarters and demanded that he be allowed to go home.

Another Bay-ang resident, Paquito Badiola, was taken by soldiers on Aug. 12, while he was on his way to buy goods at Matalod. His bullet-ridden body was later found floating in the river, and soldiers claimed he was killed in an “encounter.”

Sangguniang Kabataan leader Nonito Labong was in bed with fever when soldiers came to their house. His younger brother Salvador tried to protect him by closing the door, an act which the soldiers saw as hostility. The soldiers then forced open the door, beat up Salvador and took Nonito Labong and tortured him.