You Are Here: Home → 2009 → September → 17 → Soldier Nabbed for Spying on Lumbera, National Artist and Arroyo Critic

MANILA — National Artist for Literature Bienvenido Lumbera, a vocal critic of the Arroyo administration, is under surveillance by the Armed Forces of the Philippines (AFP).

At around 6 a.m. today, three men were seen taking photos and asking information regarding Lumbera’s house in a subdivision in Quezon City. Village guards approached and apprehended one of them. The man admitted to being an enlisted AFP intelligence personnel and, upon inspection of his identification cards, was identified as Corporal Guerrero Hannival Mosura Mondido of the Marines. The other two managed to escape.

As of this writing, Mondido is being held for questioning by subdivision security officials and is set to be turned over to the police.

In a phone interview, Lumbera said there is a possibility that the incident has something to do with his active opposition to the Malacañang intervention in the National Artists awards. 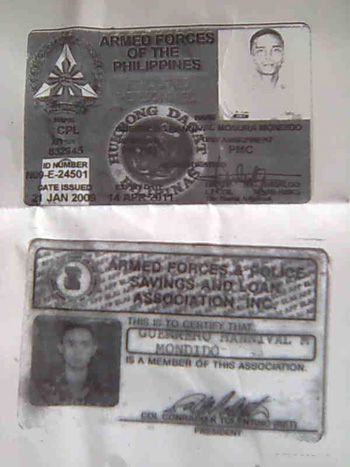 The identification card of the soldier. (Photo courtesy of Lumbera family / bulatlat.com)

He is also a convenor of Concerned Artists of the Philippines and Chairperson of ACT Teachers’ Partylist. “I don’t know why are they harassing me. Our protest is legitimate,” Lumbera told Bulatlat. (Ronalyn V. Olea / bulatlat.com)