On the 37th anniversary of the declaration of martial law, activists and victims of the brutality of military rule drew parallels between the Marcos dictatorship and the Arroyo regime. “The bad dream known as martial law has become an absolute nightmare under Gloria Macapagal-Arroyo!” one of them said.

MANILA — The scorching heat at late morning and midday and the threat of rain in the afternoon did not deter members of Pagbabago! People’s Movement for Change and the Bagong Alyansang Makabayn (Bayan or New Patriotic Alliance) from commemorating the 37th anniversary of Ferdinand Marcos’s declaration of martial law.

The theme for this year’s commemoration centered on the similarities between the Marcos dictatorship and the Arroyo regime.

Members of Pagbabago kicked off the commemoration with a program at Plaza Sta. Cruz in Manila. Numbering about 100, they gathered by the fountain at plaza, near the Sta. Cruz Parish Church, and there displayed blown-up photographs of martyred and disappeared activists from the Marcos period and under the Arroyo regime.

They also set up a mini-altar beside the line of pictures, and below the altar were photographs of Roman Catholic priests Father Cecilio Lucero and Father Rudy Romano.

Lucero is the first Roman Catholic priest to fall prey to an extrajudicial killing under the Arroyo regime. He was the parish priest of Catubig, Northern Samar. A member of the Promotion of Church People’s Response (PCPR), he also chaired the Committee on Human Rights and the Task Force Peace and Order of the Diocese of Catarman. He was gunned down by some 30 men in San Jose, Northern Samar, last Sept. 6. 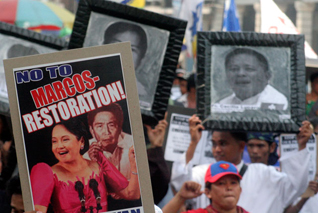 Romano, a Redemptorist priest in Cebu and was also Bayan’s founding vice-president for the Visayas. He was abducted by elements of the notorious Military Intelligence Group (MIG) in Cebu City on July 11, 1985, and has not been found or heard from since then.

The Pagbabago display of photos continuously attracted passers-by, notwithstanding the heat and the fact that, this year, the martial-law anniversary coincided with Eid’l Fitr that marked the end of the Ramadan and that the date had been declared a holiday.

Speaking at Plaza Sta. Cruz, Pagbabago co-chairperson Judy Taguiwalo, who was a political detainee under the Marcos regime, called on the people to remember the victims of martial law, especially those who were martyred.

Close to 100,000 people are estimated to have been victims of human-rights violations during martial law. Victims of extrajudicial killings during this period are variously estimated at anywhere between 1,500 and 3,257. The documented victims of enforced disappearances number 769. American military historian Alfred McCoy places the number of torture victims at 35,000.

Karapatan, the human-rights group, has documented 1,093 victims of extrajudicial killings, 209 victims of enforced disappearances, and more than a thousand victims of torture under the Arroyo regime.

“Gloria’s present use of repression and violence is no different from what Marcos did,” Taguiwalo said.

Rolando Tolentino, also of Pagbabago, said that 37 years after Marcos declared martial law, tyranny has continued. “The violation of people’s rights is more systematic,” he added.

The Pagbabago members concluded their program with an offering of flowers in remembrance of martyred and disappeared activists under the Marcos and Arroyo regimes, amid a group performance of the nationalist song “Bayan Ko.”

They then braved the noon heat and marched along Avenida Rizal and C. M. Recto Avenues. Chants of “Never again, never again – never again to martial law!” and “Ang US, si Gloria – sila ang terorista!” reverberated through the busy streets amid the cacophony of engines and the blare of horns. A number of bystanders, watching from the sidewalks, were heard voicing agreement with what was being chanted.

Along C. M. Recto, the Pagbabago members merged with the contingent from Bayan before proceeding to the foot of the historic Chino Roces Bridge, or Mendiola Bridge, which is located a few steps away from the presidential palace.

At the programs at Mendiola, Bayan secretary-general Renato reyes Jr. challenged the 2010 presidential aspirants to make sure that justice is achieved for the victims of both the Marcos and Arroyo regimes.

“There also has to be a commitment that human rights violators from the Arroyo regime will be made accountable,” Reyes said. “The present tragedy is that justice has long been denied the Marcos rights victims. It would be another tragedy if the same fate befell the Arroyo regime’s victims.”