LA TRINIDAD, Benguet — It had been raining for days and Ernesto Gayo was worried that his crops in their hometown of Barangay Cuenca, Pugo, La Union, would be ruined. He has been a farmer all his life and was anxious that the continuous outpouring of rain would damage his harvest.

However, the rain did not stop and continued to hover over La Union and the whole of Northern Luzon for 10 days.

On Oct. 9, Friday, Ernesto and his brother were at home when news came that his son Edwin and his family were casualties of the landslide brought by typhoon Pepeng in Little Kibungan Village, Puguis, La Trinidad, Benguet. He and his brother immediately travelled to Baguio.

They were not prepared for what they saw next. The village where the houses used to stand was no more. There was only mud and bits and pieces of what used to be the home of their son and his fellow villagers. Ernesto did not know what exactly happened to his son, but reports from other relatives helped them build a story. 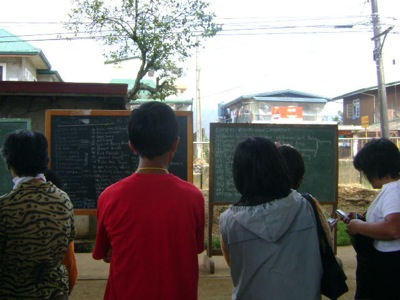 Relatives in front of blackboards listing the dead or missing in Little Kibungan. (Photo by Joan Garcia / bulatlat.com)

According to one relative, on the midnight of Oct. 8, Janet, Edwin’s wife, texted her sister. Janet said that she and her two daughters needed company at their house. This prompted her sister to send her husband to Janet’s house. After that, they could no longer contact the family.

Ernesto had to wait until Saturday before the bodies of his son, daughter in law and grandchildren were found.

Erwin died with his wife and their two children aged two and six years old. The husband of Janet’s sister is still missing.

Ernesto and his relatives are temporarily living in the halls of Puguis Elementary School while waiting for the body of his son’s brother-in-law. Once they find him, they will again travel to La Union for the burial of their loved ones.

The friends of Joel Suarez, 29 years old were surprised that he was one of the victims of the same landslide that claimed the life of Edwin and his family. One of his friends did not even know that he was already living at Little Kibungan as he used to live in Baguio City.

According to Leonie Suarez, Joel’s mother, the house above her son’s house fell directly on their home. An uncle immediately came to the rescue of his nephew. Joel was able to pass his four-year-old son to his uncle and was about to reach for his other child when their house collapsed.

Joel, his wife, eldest son and uncle also died because of the landslide.

For now, Leonie still does not know how to respond to her grandson’s questions regarding his parents.

According to Ernesto, going home will be harder now with the reality that they are five family members less. However, they are thankful that they have already found the bodies of their loved ones.

The landslide in Little Kibungan already claimed 85 lives as of Oct. 11 and more bodies are found each day. (Bulatlat.com)