Come November 10, 13 Artists Awardee for 2009 Raoul Ignacio “Iggy” Rodriguez can claim yet another milestone up his sleeves with the opening of his first Solo Exhibit at the Blanc gallery in Mandaluyong City. The exhibit would run until the end of the month.

For a full-time activist and community organizer, finally coming up with a solo exhibit is a not an easy task. Apart from organizing urban poor communities and trade unions, Iggy heads Sining Bugkos, an alliance of artist and cultural organizations in the National Capital Region, which includes the UGATLahi Artist Collective of which he is a member since 1992.

But this is something that is long overdue for an artist of Iggy’s depth, dedication and talent.

And the wait is all worth it with Iggy’s 11-piece series “Kimi Imik.”

Having chosen a palindrome for his first show’s title, Rodriguez’s visual poetry is witnessed in his works’ metaphorical yet straight-forward images, thus, getting the message across for each work, clearly.

The series is composed of contradictions revolving around the destruction of the universe by imperialist domination and at the same time the rising of the oppressed towards changing that world order.

One clear example of this is the oil 5.5 X 9 square ft. pagbabanta that shows a man, looking like a red-caped crusader, standing over a ground of ruined establishments. The man’s red cape could symbolize the blood of the oppressed or a flag of freedom or rolls of papers, which is a constant in the series.

The same rolls of papers are visible with other pieces such as the oil sa dulo ng papel and the pen and ink pundasyon. In both artworks, Iggy portrays a monster-like creature taking control of the paper above a world in turmoil.

Though the artist would rather leave the interpretation to his audience, he explained that yes, the rolls of paper could also be interpreted as roles people take in the midst of a socio-economic, cultural and political crises in the country. It is actually a question posted by the series, says, Iggy. 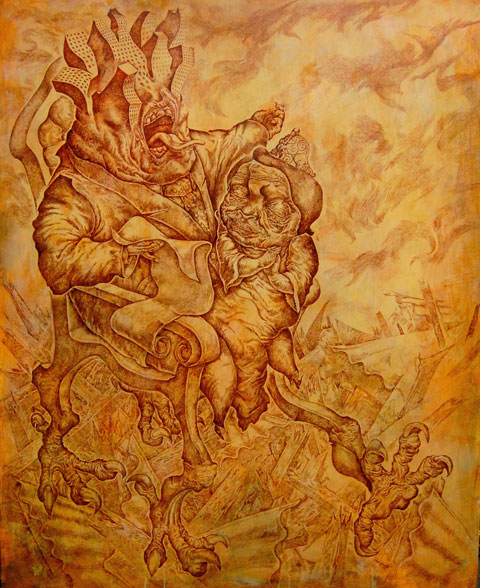 In sa dulo, the rolls of papers are also waves and ripples of floodwater below a monster holding another paper and a pen while in pundasyon, a small ugly woman, representing the current Philippine president, is sitting on the lap of the monster sitting on the chair. The chair’s feet are gigantic claws, a symbol of imperialism. Those claws are yet another constant in most of the series’ pieces.

These claws are also seen in other pieces in the exhibit such as in the classic-bound hindi laging ganito, in which a man emerges from the claws of towering buildings.

In these two eye-catching pieces, Iggy shows his capability to shift from one dramatic milieu to another. While most of the pieces could be seen as largely political, Iggy turns subtle and emotional with sagrada familia, a simple portrait a mother, father and a child.

Yet, when one looks at the piece longer than two seconds, the initial subtlety of the image is erased and the emotions evoked by the faces of the mother and father become more than simple. A string of different human drama is released, especially when viewed in contrast with no es sagrada familia, which shows a wealthy, greedy family in the midst of, yes, storms.