ON THE MAGUINDANAO MASSACRE AND THE DEATH OF ATTY. CONNIE BRIZUELA

We grieve over the death of Atty. Concepcion ‘Connie’ Brizuela, a member of our board of convenors, who was among the many victims of pre-election violence in Maguindanao province November 23.

Our heartfelt sympathies go to Connie’s husband and children who have supported her advocacies through the years as former legal counsel of the Diocese of Kidapawan, as peoples’ lawyer, and as a woman human rights defender. 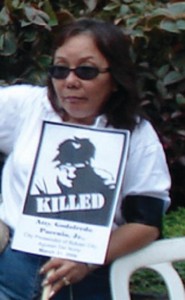 Connie’s killing, along with at least 35 civilians mostly journalists, political supporters, including another lawyer colleague, is a carnage that requires the Arroyo government to muster all its resources and political will to bring the suspected Ampatuan warlord clan to face the law.

We demand no less than for President Gloria Macapagal Arroyo to end her political patronage of the Ampatuan warlord clan and all her armed political allies elsewhere in the country whose rule is forced on their constituencies through fraud and terrorism.

We demand no less from government than to bring justice to all those fallen by this senseless political violence.

However, we believe that this pre-election violence should be seen from the wider perspective of the culture of impunity that prevails under the present dispensation.  Government cannot claim this as another isolated and containable incidence of violence, much less as merely an election-related one.

Yesterday’s massacre was spawned by a culture of impunity that has long been kept unchecked by a government that is now widely perceived by the international community to be tolerant or approving of extrajudicial killings, enforced disappearances and other human rights violations. 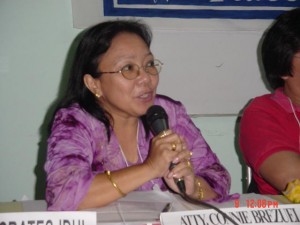 This culture of impunity imperils the exercise of the legal and media profession in the country and the defense of human rights and fundamental freedoms including the right to suffrage.

We can only surmise that, as a lawyer, Connie must have asserted herself as part of the negotiating panel to ease the tension or to remind their would-be attackers of the rule of law, if any such dialogue could have occurred at all.  We are certain as well that Connie, having been a broadcaster herself, and her companions, had thought that a horde of media practitioners and the presence of women would deter any act of violence against their party.

But because of the culture of impunity in this country, these have become mere notions.

The unchecked rule of political warlords like the Ampatuans, army and police units like those controlled by President Arroyo’s mistahs, and warmongers in government like General Hermogenes Esperon and National Security Adviser Norberto Gonzales, make up a culture of tolerance for killings and contempt for the rule of law. Thus, this culture of impunity traces itself right back at the doorstep of Malacañang.

Connie had been at the forefront of the campaign against impunity. We are outraged that it has caught up with her through this tragic and gruesome death.  We will miss her. She was a gentle but firm and determined human rights advocate.  In her diminutive frame loomed large a feisty peoples’ lawyer and human rights defender undeterred by the rich and the powerful  in Mindanao.

JUSTICE FOR ALL HUMAN RIGHTS DEFENDERS!

JUSTICE AND PEACE IN MINDANAO!