You Are Here: Home → 2009 → December → 9 → Ampatuan Massacre a Culmination of Decades-Long ‘Culture of Impunity’ — IFJ

Ampatuan Massacre a Culmination of Decades-Long ‘Culture of Impunity’ — IFJ 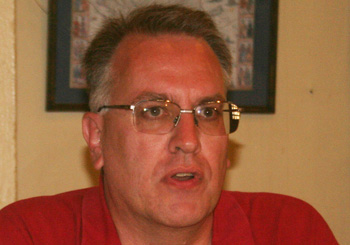 In this interview with Bulatlat’s Carlos H. Conde, Mike Dobbie of the Asia-Pacific office of the International Federation of Journalists (IFJ), which led an international mission looking into the Ampatuan Massacre, emphasizes that pressure on the government has to be kept and maintained in order to end the culture of impunity in the Philippines. The massacre, in which 30 journalists were killed, “is a culmination of the decades-long culture of impunity, where it’s been okay to kill journalists and nothing will ever happen — there will be no prosecution, there will be no trial..”

Before the interview, Dobbie also spoke before a crowd of journalists and activists during the Global Action Day Vs. Impunity protest rally in Mendiola, Manila.