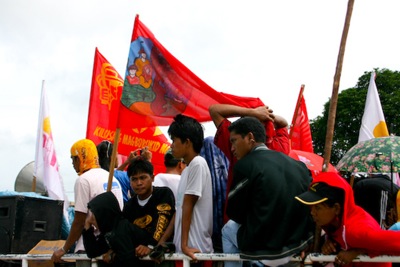 MANILA — The first-ever nationwide peasant caravan for land and justice, now on its fifth day in the Bicol region, has been facing harassment from the military since yesterday, Jan. 15.

The caravan led by the Kilusang Magbubukid ng Pilipinas (KMP) and Anakpawis party list took off from Davao City on Monday. The farmers intend to reach Manila on Jan. 22, the 23rd anniversary of the Mendiola Massacre.

According to reports from the KMP as well as participants to the Lakbayan, soldiers belonging to the 22nd Infantry Battalion of the Philippine Army stopped the caravan in Daraga, Albay. Anakpawis Rep. Joel Maglunsod and KMP secretary general Danilo Ramos had to negotiate with military officials before the contingent was allowed to proceed. A certain Sgt. Basilio came out of the military detachment and checked the contingent but, according to one participant, he had the intention of delaying the Lakbayan. The soldier also wrote down the plate numbers of the vehicles used in the caravan.

The caravan, now composed of more than 700 farmers from Mindanao, Visayas, and Bicol, managed to pass military checkpoints but as they marched toward Legazpi City, a military helicopter hovered above the contingent while the participants were holding a rally in front of Camp Simeon Ola, an AFP camp. Inside the helicopter, which was flying low, was a person holding a camera aimed at the crowd.

Yesterday, several military personnel tried to block the farmers’ contingent from the Visayas and Mindanao, particularly those coming from Allen town in Northern Samar.

A certain Owen Tan with numerous identification card of the Philippine National Police and the AFP – Military Intelligence Group was nabbed by the farmers after he took pictures of the protest rally in Allen.

“The AFP is paranoid over the farmers’ caravan that aims to expose the Arroyo administration’s outright denial of their demands for land
reform and the blatant human rights violations perpetrated by the military against the peasantry,” said Anakpawis Representative Rafael Mariano, who also chairs the KMP.

“The military can delay the caravan but they cannot stop the farmers who are determined to reach Malacanang,” the peasant leader said.

As of press time, the south wing of the caravan which is now composed of delegates from Visayas, Mindanao and Bicol region are in Legazpi City. They will now travel toward Tagkawayan, Quezon, before proceeding to Lucena City.

Meanwhile, the north wing of the nationwide farmers’ caravan also started their assembly and vigil at the doorway of Hacienda Luisita a
few meters in front of Camp Serviliano Aquino in Tarlac City. Hacienda Luisita farm workers and Mariano himself welcomed the farmers from Nueva Ecija, Pangasinan and Aurora provinces.

Today, the caravan will proceed to San Fernando, Pampanga.

“Gross and systematic human rights abuses and landlessness in the countryside are the very same reason why the farmers have launched an exodus toward the national capital. The military should stop blocking farmers’ way to Malacanang,” Mariano said. (Ronalyn V. Olea, with reports from King Catoy / MayDay Productions)